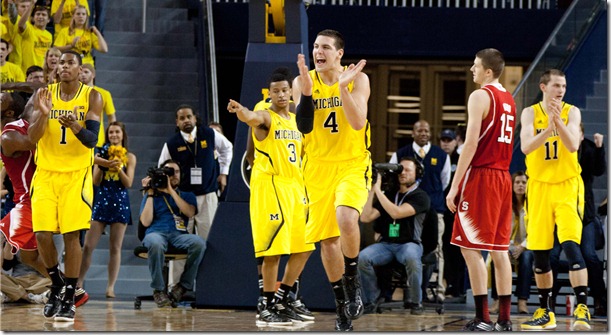 NC State had the talent to score the ball against Michigan but the 18th ranked Wolfpack lacked the discipline, depth or will to stop the Wolverine offensive attack. Of course, that Michigan offense that NC State couldn’t stop looked like a unit unlikely to be slowed by many, if any, opponents this season. The Wolverines controlled the game throughout, despite allowing the Wolfpack to creep back with a late run, and marched to a Big Ten-ACC Challenge win by a final score of 79-72.

It was a tale of two halves for Michigan’s All-American point guard, who played the position to near perfection. In the first half, Trey Burke was content to play facilitator and let Nik Stauskas unleash his entire offensive repertoire. Burke handed out nine assists while Stauskas shot and slashed his way to 13 first half points on just five field goal attempts. In the second, Burke got involved in the scoring column, adding 18 points of his own to accompany a career high 11 assists on the night. Burke and Stauskas were extraordinary but they received plenty of support from Tim Hardaway Jr. (16 points) and Glenn Robinson III (11 points and seven rebounds) in the big win.

Make no mistake about it, this was a dominant offensive performance. Michigan scored 1.25 points per trip despite a 4:20 scoring drought late in the second half. For about 33 minutes, the Wolverines were nearly flawless offensively. Michigan hit 60% of its twos, 38% of its threes, and got to the free throw line consistently. The Wolverines didn’t attack the offensive glass as aggressively (to counteract NC State’s transition game) but their prolific shooting efficiency was more than enough to win the game.

Michigan’s defense wasn’t nearly as effective as it has been in early season play. As I wrote in the preview, NC State has more than its fair share of individual one-on-one talent and Michigan had no answer on the defensive side of the ball. The Wolfpack matched Michigan’s heroic shooting effort, connecting on 60% of their two point attempts and racking up a 59% effective field goal percentage. Michigan’s front court defense couldn’t slow CJ Leslie, TJ Warren and Richard Howell as they combined to make 22 of 34 shots inside the arc and would have done even more damage if not limited by foul trouble. Michigan’s defensive rebounding also hit a snag, allowing NC State to rebound a third of its missed shots including seven second half offensive boards. 54 of NC State’s 72 points came in the paint and 14 of those were off of offensive rebounds.

The Wolverines have been stout on the interior and on the glass throughout early season play but this performance should serve as a red flag. Michigan’s offense was so great that it masked a subpar defensive performance that simply won’t be good enough to consistently win games as the season wears on.

John Beilein’s option to play two posts was critical for surviving against NC State’s front line. McGary and Morgan were far from dominant but battled and played hard, even if they didn’t always win, and allowed Michigan to hang in there. Offensively, the two post option still isn’t nearly as effective as it needs to be. Morgan still looks a bit uncomfortable at the four offensively while both Michigan posts botched an easy basket or two by bobbling catches or hesitating around the basket. The next month should provide opportunity for Beilein to continue to tweak this look offensively whether it’s a high-low set, specials designed to get one or the other the ball or just allowing Morgan to be more comfortable away from the basket.

Michigan has done a pretty good job at closing out games this season but came dangerously close to letting this one slip away. The Wolverines appeared to be in cruise control, up 15 points with 5:57 to play, before setting off on a victory lap before the final whistle. NC State held the Wolverines scoreless for six possessions and mounted a quick 10-0 run. Hardaway bailed Michigan out with a big finish at the bucket before McGary sealed the deal by drawing an offensive foul on CJ Leslie in the post. The late game sloppiness should serve as a lesson for Michigan’s young team (McGary and Robinson both had critical turnovers late) that it’s important to execute to the final horn.

The buzz on Twitter, ESPN or anywhere else is that Michigan looks like a team capable of making a Final Four run. The offense is clearly good enough. John Beilein is spoiled with far too many weapons including Burke, Hardaway, Stauskas and Robinson to not score points in bunches. The defense has been good through six games but Tuesday’s performance serves as a reminder that it’s not quite at an elite level just yet.