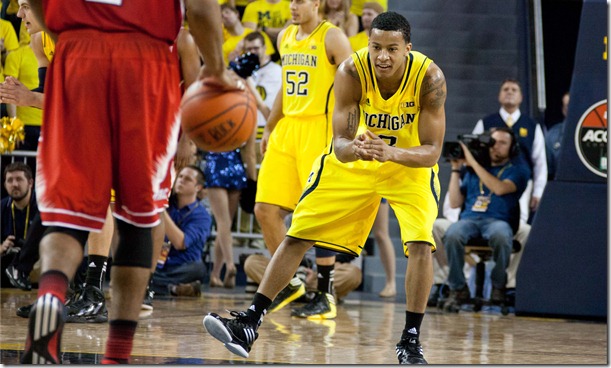 This is the first edition of a new feature, what we’re calling Form Tracker. The season is a grind and we’ll be evaluating each Michigan player’s individual contribution over the week that was on a scale of 1 through 10 — 1 being a horrible week, 10 being near perfect. Borrowing an idea that stems from soccer, we’ll keep track of trends while we chart individual ups and downs throughout the season.

Hardaway has been perhaps the toughest player on Michigan’s team for opponents to stop, simply because he can hurt opposing teams in so many different ways. Hitting an astounding 70 percent of his two-point attempts this season, Hardaway took home the NIT Tip-Off Most Outstanding Player award after Michigan won the tournament on Friday.

Burke is coming off of what was perhaps his most complete performance of his career against NC State on Tuesday. The point guard had 18 points and 11 assists for what was, unbelievably, his first double-double at Michigan. Burke is now ranked 3oth in assist rate by Ken Pomeroy, a marked improvement over his final ranking last year — 129th.

The freshman has been one of Michigan’s most pleasant surprises this season, and against NC State on Tuesday the talented shooter took a big leap forward by leading all Michigan scorers with 20 points. Stauskas has also been shockingly efficient — his offensive efficiency ranking of 161 is fifth in the country. He’s not just a shooter though, and he’s capable of driving to the hole:

Michigan fans expected Glenn Robinson III to make athletic plays in the open court, but one of the surprises so far has been his shooting — the freshman is hitting a slightly higher percentage of his 3-pointers than both Tim Hardaway Jr. and Trey Burke. He’s also rebounding the ball extremely well, with over seven rebounds per game.

The redshirt junior has provided a steady hand for the Wolverines on defense, though he needs to stay out of foul trouble — Morgan played only six minutes against Kansas State in the NIT Tip-Off Final. He has also been collecting offensive rebounds, notching two against NC State.

The frenetic McGary continues to improve with every game. The Chesterton native has his freshman moments, but he is invaluable on the offensive glass, with a offensive rebounding percentage of just over 19 at this early point in the season. McGary played the best game of his young career against NC State and should improve by leaps and bounds as the season continues.

While Albrecht was a bona-fide playmaker in the preseason, he has — as expected — regressed toward the mean as the regular season gets into full swing. He is still solid in spelling Trey Burke and is good for the occasional 3-pointer. Look for Albrecht to get some extra opportunities as Michigan’s schedule softens in December.

We don’t have a very large sample size to draw from, much to John Beielin’s chagrin, as he laments his crowded frontcourt after almost every game in which Horford sees limited minutes. When he’s on the court, Horford isn’t eye-popping, but it can be difficult to find a groove without much run.

Unfortunately for the senior shooter, it seems the only reason he remains in the starting lineup is because of John Beilein’s superstition. However, after a slow start against NC State and given the immediate spark Nik Stauskas gave the offense coming off the bench, even that may not be able to keep him there.