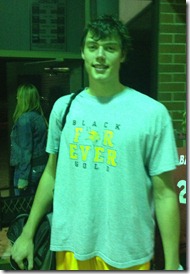 Class of 2014 center and Michigan target Ricky Doyle is beginning to assert himself as one of the most dominant post players in the Southeast through the first four games of Fort Myers (Fl.) Bishop Verot’s season.

Doyle, who is nearly 6-foot-10 and 235 pounds with a 7-foot-2 wingspan, scored 25 points (21 in the second half) during his team’s 70-56 victory over LaBelle on Thursday night. He did so despite logging big minutes for the third time this week as Verot earned three victories in three straight nights. Doyle is now averaging 26 points per game, over six rebounds per game and two blocked shots per game for the Vikings (3-1).

After a first half against LaBelle where he struggled to consistently get open and his teammates struggled to get him the ball, Doyle dominated the second half. He scored the first 12 points to help the Vikings take a lead they would never rescind. He scored in a variety of ways including a baby hook shot while moving across the lane, up-and-under move and two thunderous dunks after using his body to free himself of his defender. He also displayed an ability to clear his defender out of the lane to create room for driving teammates.

Doyle’s back-to-the-basket skills are second to none for a player his age. He is proficient finishing with both hands and has an array of post moves to choose from. He can also catch the ball in the post, face up and score consistently coming across the lane as well as showed on multiple occasions against LaBelle. He took just one shot outside of the paint in Thursday’s game but has showcased a smooth mid-range jump shot in the past that indicates that he is comfortable offensively outside of the paint.

Because of the area that he plays basketball in (a high school football hotbed), it is difficult to evaluate how Doyle’s on-ball defense projects to the college ranks. He faces very few players his size in Southwest Florida and almost always finds himself guarding players roughly six inches shorter than him on the perimeter. He is athletic enough to stay with those players but is obviously better suited to defend the post.

Verot often times plays zone defense and this plays into Doyle’s strengths as a defender more than man-to-man defense does. He is a very smart defender in that he knows appropriate times to shot block and when it is appropriate just to attempt to alter shots with his length. He is very rarely in foul trouble because of this. In Verot’s zone, Doyle never has to leave the paint and does a good job communicating to his guards about cutters and directing players into position.

As far as his rebounding and defense, he is very similar to Jordan Morgan in that he is not going to ‘wow’ anyone with his athleticism right now. Doyle could probably grab more rebounds than he does but he is often times content to let Verot’s guard rebound while finds someone to box out. You can tell he has been well-trained because when a shot goes up he is immediately looking for a player to box out rather than trying to grab it off the rim. This will come in handy when he is playing major college basketball and all of the players on the floor are around his skill level.

Carl Bleich is a freelance sports writer that covers high school and college sports and is based in the southeast United States.

Stay tuned for more on Ricky Doyle including video interviews, scouting clips and more in the days to come.