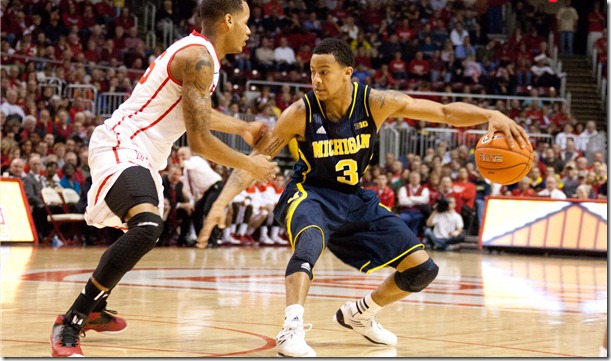 College basketball coaches will tell you that any road win is a good one. John Beilein got just what he wanted out of his team’s 74-66 win at Bradley on Saturday afternoon. The victory was far from perfect as Bradley hung around early and made a big push late, but Michigan prevailed and passed its first true road test. Carver Arena provided an environment hostile enough to give the Wolverines a taste of what lies ahead but safe enough that Michigan could lead from wire-to-wire and move to 7-0, winning its first road game of the season for just the second time under John Beilein’s tutelage.

Nik Stauskas led all scorers with a career high 22 points and was phenomenal in the first start of his young career. While Stuaskas notched big basket after basket, he had plenty of help. Jordan Morgan added a 10 point and 10 rebound double-double while Trey Burke (16) and Glenn Robinson III (13) also reached double figures in the victory.

Michigan dominated the offensive glass on the night, grabbing over half of its first half misses and 40 percent of its misses on the game. Bradley isn’t a great rebounding team but Michigan’s 10 second chance points were the critical difference in the game. It felt like the Wolverines missed a number of attempts around the basket, especially on put-backs, but the shooting numbers are still strong. Michigan made 50% of its twos and a sizzling 47% of its threes for a 56% effective field goal percentage.

The Wolverines were uncharacteristically sloppy with the basketball, coughing it up on one out of every five offensive possessions. Hardaway (5 turnovers) was the primary culprit but there was blame to spread around as Burke, Robinson and Morgan all turned the ball over twice. Bradley is one of the best in the country at forcing turnovers, especially via the steal (Bradley had 10 steals on the game), but the Wolverines will have to improve in that regard.

This game, perhaps as much as any this season, proved that this Michigan team is capable of winning games in a multitude of different fashions. This team isn’t only a stereotypical perimeter oriented team and there’s more than one combination to unlock victory. Just 28 percent of Michigan’s field goal attempts came from three point range and the Wolverines actually attempted more free throws (21) than threes (15). Michigan was out-shot by Bradley but prevailed because of its ability to dominate the glass and get to the free throw line, something that we simply haven’t seen since John Beilein arrived in Ann Arbor.

For the second consecutive game, Michigan’s interior defense struggled. Bradley shot the ball well inside (59%) and outside (38%) whether it was Walt Lemon Jr. (7-of-11 fg, 1-1 3pt) slashing to the bucket, Jordan Prosser (5-8 fg) finishing on the block, or pretty much anyone else (six of Bradley’s primary seven players scored 9 points or more). The Braves offense was good, scoring 1.03 points per trip, but turnovers served as a debilitating equalizer. Bradley turned the ball over on 22% of its offensive possessions (many unforced) and wasn’t able to make up the empty possessions on the offensive glass (23% offensive rebounding rate) or at the free throw line (24% FTA/FGA).  Bradley’s offensive struggles led to some easy buckets for Michigan’s offense as the Wolverines scored 13 points off of 15 Brave turnovers.

John Beilein made some strong adjustments out of the half time break which seemed to help Michigan open up the game after a tenuous first half. First, Michigan guards began to find the rolling man (Morgan) in the screen-and-roll game which yielded some early offense. Beilein also tried everything in his power to get Tim Hardaway Jr. involved and while the Michigan junior wasn’t perfect he scored a quiet nine points in the second half. Beilein also deserves kudos for a strong sequence off of a late timeout with Michigan up nine points with seven minutes to play. Michigan ran three crisp offensive sets and rattled off a 6-0 run that stretched the lead just far enough to feel comfortable.

But for the second consecutive game, Michigan failed to close out the game late with a big lead. A comedy of Michigan errors – poor decision making, turnovers against ball pressure, uninspiring stall offense, not knowing the shot clock out of a timeout situation – led to a late 11-0 run by Bradley which cut a comfortable 16 point lead to just five points with under a minute to play. Michigan is lucky to have escaped NC State and Bradley but without correction these problems will rear their head and cost the Wolverines a game down the line.

With so many road nightmares in recent history (Virginia, Utah and Iowa come to mind first), any road win is a good win. Michigan was far from perfect but still controlled 38 minutes of play against a scrappy and improved Bradley team. The Wolverines will have to play better on the road in the Big Ten but for six of the nine Michigan players on the floor today this was their first collegiate experience in a hostile venue. John Beilein will certainly pocket the road victory and move on.