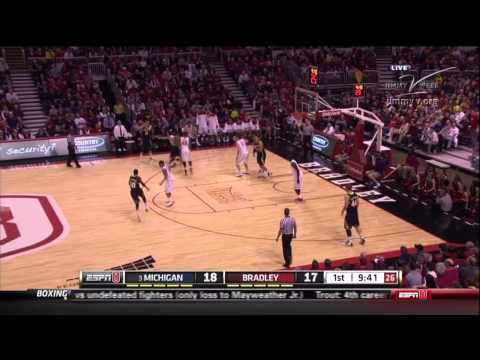 Michigan’s offensive rebounding helped turn the game in the first half. John Beilein opted to utilize multiple two-post looks and Michigan was able to rebound 40 percent of its missed shots for the game. The Wolverines were able to dominate Bradley’s front line physically and were able to get pretty much any rebound they wanted – especially in the first half. This possession illustrates Michigan’s ability to grab offensive boards but also the fact that Michigan needs to become more efficient finishing its second chances. After Max Bielfeldt misses a 3-pointer in the corner, Mitch McGary rebounds the ball. McGary and Bielfeldt have been the Wolverines most consistent offensive rebounders on the season with offensive rebounding rates over 20 percent. On this play the duo combined to grab five offensive rebounds on one possession before finally tipping the ball in to end the possession.

2) Trey Burke with an acrobatic finish on the fast break

There are usually at least a few plays in the course of every Michigan game where Trey Burke’s immense talent is on full display. This was one of those plays. Burke gets the ball from McGary and runs a one-man fast break right at Bradley’s Jake Eastman. Eastman actually does a remarkable job of avoiding contact, but Burke seeks it out. He goes right at Eastman and when he feels the contact, he turns mid-air and flips the ball in the basket. There just aren’t very many players in the country who can pull off a maneuver like that. This play also illustrates Michigan’s reliance on the fast break during this game. They botched a few opportunities for easy buckets in the first half due to poor passing, but in the second half the Wolverines shored it up and got some solid offense off the fast break. Given that Michigan rebounded almost 80 percent of Bradley’s misses, it had plenty of opportunities to get out and run. And with big men like Mitch McGary who are excellent at finding the outlet, Michigan wound up with situations like this one.

Stauskas had a terrific all-around game against NC State on Tuesday, but against Bradley he showed just how dangerous he is from beyond the arc. He just keeps putting up numbers. In his first start of the season, Stauskas was 4-for-5 from 3-point range and led all scorers with 22 points. His release is so quick that it allows him to get his shot off in almost any situation. Not to take anything away from Stauskas, but it was clear during the game that he benefited from Bradley defenders being preoccupied with all of Michigan’s other weapons. That’s one of the reasons to believe the hype about Michigan: defenses simply cannot key on one guy and expect to be effective. Every player on the court can score, and usually four out of five can knock down 3’s. If Nik Stauskas continues to turn in performances like this one, it makes defending the Wolverines an extraordinarily tall order. The most important aspect of Stauskas’s production: big baskets in big situations. These five buckets came with 3, 2, 7, 4 and 11 point leads and felt like critical situations.

Michigan had built a double-digit lead throughout the second half, but Bradley cut it to nine with about seven minutes left in the game. This was too close for John Beilein, and he called a full timeout. Coming out of the timeout, Michigan reeled off six straight points in impressive fashion, forcing Bradley to take a timeout of their own. Seeing that Bradley was playing zone, Michigan sliced and diced it by getting the ball in the middle to Tim Hardaway Jr., who was positioned at the free throw line. Hardaway ends up with something of a one-on-one situation with Eastman and takes full advantage with a strong drive to the hoop. On the second play of the sequence, it’s obvious Nik Stauskas has been watching Trey Burke in practice; the freshman puts a nasty hesitation move on Jordan Prosser and takes the big man to the rim. Stauskas comes up big again the very next play with a crisp assist to Jordan Morgan. It was a classic pick-and-roll: Morgan sets the pick and slips past his defender — Stauskas is then able to fit the pass in between two players so that Morgan can finish with a dunk.

5) Bradley goes on a late run

The ending to the game on Saturday looked disturbingly familiar to Michigan fans. The Wolverines found themselves up by double digits with about three and a half minutes left, but due to a lack of execution on offense and some poorly-times turnovers, Bradley was able to creep back into the game. This same thing happened against NC State on Tuesday, and Michigan was fortunate to have held such large leads in both situations or we could be talking about a couple of losses. In both of these games, Michigan was relying on its offense to build its lead, not its defense — the Wolverines allowed Bradley to make 58 percent of its twos and 38 percent of its threes on Saturday. What Michigan has relied on is outscoring its opponents and overpowering them offensively, and they have done a great job of it so far this season. Michigan is trying to burn clock on quite a few of these possessions but most Wolverine mistakes have more to do with a sheer lack of execution than a stagnated offense.