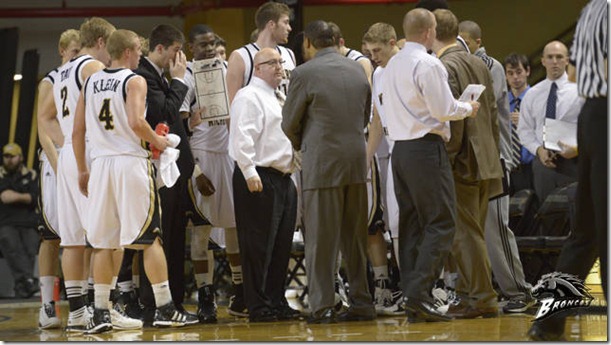 Michigan looks to remain undefeated on Tuesday evening as it hosts its first of three Michigan directional schools this December. The Broncos are off to a surprising start under 10th year head coach Steve Hawkins and have shown early signs of improvement from last year’s 14-20 season. Michigan managed to keep Bradley at arm’s length in a weekend victory despite a couple tenuous moments in its first road victory.

Western Michigan has played its way to a 5-1 record but Ken Pomeroy’s computers have yet to be impressed. The Broncos have actually moved down 5 spots from their preseason KenPom ranking of 191 but Steve Hawkins’s team has demonstrated the ability to grind out games early this season. Western Michigan already won at South Florida, a NCAA tournament team last year, in a 58 possession slug fest and has already won three games away from home at road or neutral venues.

Western Michigan’s offense is fairly nondescript. The Broncos rank 198th in Ken Pomeroy’s adjusted offensive efficiency and fall somewhere between 93rd (free throw rate) and 184th (offensive rebounding) in each of the four factors. Western Michigan is much more efficient shooting from three point range (38%, 55th) than two point range (45%, 229th) but attempts just 32% of its field goals from beyond the arc. Despite getting a large portion of their shots blocked and struggling to finish around the basket, the Broncos are proficient at drawing fouls and getting to the charity stripe.

Michigan’s defense is setup nearly perfectly to stop Western Michigan. The Wolverines are one of, if not the very best teams at at avoiding fouls (1st in FTA/FGA allowed) and cleaning up defensive rebounds (3rd in DR%) in the country. Michigan’s two-point defense has shown its flaws in recent games but this should provide a strong bounce back opportunity for the Wolverines interior defense. If Michigan can force Western Michigan to shoot difficult, contested two-point shots and continue to avoid fouling and clean up the glass, this game could get out of hand quickly.

The Broncos aren’t any better on the defensive side of the ball, ranking 200th nationally, but do have a bit more of an identity. Western Michigan’s defense follows similar principles as Michigan, focusing on defending twos (42% 2P% allowed, 48th) and cleaning up on the defensive glass (74% DR%, 31st). The Broncos force very few turnovers (also a problem for the Wolverines) and struggle to defend the three point shot. However, the best offense that Western Michigan has faced is Oakland (KenPom 88th offensively) and nothing that comes close to the offensive quality that Michigan is capable of.

Nate Hutcheson leads the Broncos in scoring but touts an inefficient offensive rating under 100. Hutcheson averages 14 points per game but shoots just 45% on twos and 33% on threes. To his credit, he does a great job of getting ot the line and is an above average shot blocker for a 6-foot-7 player as well. 6-foot-8, 220 pound freshman Darius Paul has been a pleasant surprise for Western Michigan. The younger brother of Illinois senior Brandon Paul, Darius is an efficient and productive scorer that makes 53% of his twos and also excels on the offensive glass.

Brandon Pokley is the primary three point threat for the Broncos as over half of the 6-foot-4 senior’s field goal attempts come from behind the arc and he’s connected on 15-of-33 (46%) long range efforts. Pokley will be joined in the backcourt by 6-foot-2 point guard Austin Richie, the team’s best setup man but also most turnover prone player.

Shayne Whittington anchors the middle at 6-foot-10, 220 pounds and provides elite rebounding and shot blocking prowess. Whittington boasts the nation’s eighth best defensive rebounding rate, grabbing over a quarter of opponents’ misses by himself, and also ranks in the top-100 nationally in block percentage. Whittington isn’t a great finisher (47% 2P%) but he gets to the line often.

Jared Klein and Connar Tava are the primary options off of the bench. Klein is most likely to impact the game with his three point shooting (6-of-14) or grabbing steals while Tava has yet to find a groove as a freshman and is shooting just 38% from the floor.

The critical match-ups for Michigan defensively appear to be how Tim Hardaway Jr. and Glenn Robinson III handle the wing combination of Paul and Hutcheson. The Broncos don’t have the defensive weapons to match-up with Michigan across the board which should yield a heavy Wolverine advantage if Michigan’s wing defenders can slow down Western Michigan’s best scorers.  The Wolverines are unlikely to overpower Whittington in the middle for offensive rebounds but should continue to dominate the defensive glass.

KenPom likes Michigan, by a wide margin, predicting a final score of 75-53 and giving the Wolverines a 97% chance at remaining perfect. Western Michigan is the best mid-major left on Michigan’s schedule, but shouldn’t pack the punch to upset the Wolverines at Crisler Center given both teams current form.

This & That: Two and a half years ago, Bacari Alexander and LaVall Jordan joined the Michigan coaching staff. The full sale changes that saw Alexander and Jordan join Jeff Meyer as Michigan’s revamped assistant coaching staff unquestionably changed the direction of John Beilein’s program. The hires also ruffled quite a few feathers in Kalamazoo where Steve Hawkins lost not just Bacari Alexander but his replacement in LaVall Jordan in two months’ time. At the time Hawkins chided Beilein for tampering with his staff, a notion that Beilein dismissed, but now the two teams will finally meet on the floor.

Western Michigan has won its last two games against Michigan and most recently beat the Wolverines by a final score of 56-52 on November 30, 2002. However, Steve Hawkins is 0-7 against Big Ten teams at Western Michigan and this will be the first time a Hawkins-led Bronco team has played Michigan or Michigan State.