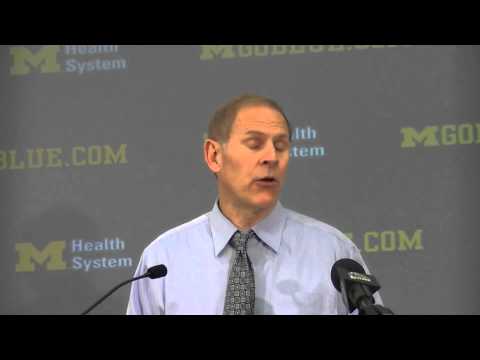 John Beilein spoke to the media after his team’s 73-41 victory over Western Michigan on Tuesday. He addressed the superb play of Trey Burke and also passed along that Max Bielfeldt sprained his ankle late in practice yesterday and may not be able to play against Arkansas on Saturday. You can watch using the embedded media player below or read selected notes and quotes after the jump.


Opening statement: “I don’t know how close you are to our bench but if you looked at our faces in those first ten minutes, we did not predict that outcome. I love the way Western Michigan was playing early. The ball was flying around, they got a lot of good passes. They have a great scheme that they’re running, and they run it with such speed and precision that our heads were spinning. Our guys picked up the pressure a little bit. We did a few other things and we had to feed off our defense because out offense, we missed some shots. Our fast break keyed the first half.  In the second half, we executed offense really well and our defense was terrific.”