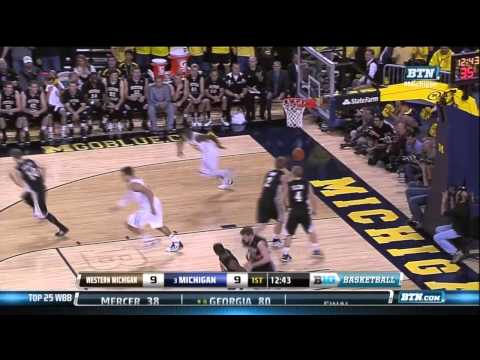 1. Tim Hardaway Jr. breaks away for a dunk in the first half

John Beilein emphasized the importance of the fast break to Michigan’s offense in the first half, and this highlight-reel play by Tim Hardaway Jr. is an excellent example. Michigan began the game in a fog on both ends of the court, allowing Western Michigan to score in the post and having trouble finding open shots of its own. With the score tied at nine and just under thirteen minutes left in the half, the Wolverines needed a spark. Tim Hardaway Jr. was able to provide just that with this jarring slam off the fast break. Mitch McGary did a nice job defending a short fadeaway by Darius Paul after Paul got an offensive rebound. Glenn Robinson III rebounded Paul’s miss and got the break going immediately. One of the nice things about having so many able rebounders is that often guys who pull down defensive rebounds, like Robinson or Hardaway, can start the break themselves. Robinson cleans the glass and puts the ball on the floor, ready to start the break. He finds Hardaway on the wing and the star junior does the rest himself.

With about six minutes left in the opening half, Michigan was nursing a slim five-point lead. The Wolverines looked like they had rolled out of bed and onto the court. But from Hardaway’s strong and-1 finish at the rim on the fast break to Mitch McGary’s layup in the post with about a minute and a half remaining, Michigan went on a 15-2 run that gave them a comfortable 14-point lead going into halftime. During its run, Michigan scored in a variety of ways. The Wolverines finally knocked down some 3-pointers; Nik Stauskas buried one from the wing and then Trey Burke found freshman Caris LeVert, as the shot clock was winding down, at the top of the key and Levert knocked it down for his first career points. Hardaway factored into this run in a big way, scoring on a 3-point play on the fast break, finding Mitch McGary unguarded in the post for an easy lay-in, and also running the pick-and-roll to perfection with Jordan Morgan. It should be noted that the pass Hardaway threw to Morgan on that play looks a lot easier to catch than it was — Morgan grabbed that ball out of the air with one hand from about five feet away, and it wasn’t exactly a soft toss. That’s a difficult play to finish, and Morgan deserves credit for doing his part.

3. Michigan forces 13 Western Michigan turnovers in the first half

While the 15-2 run was indeed a major turning point for Michigan, it was made possible in part by the Wolverines’ tenacious defense and the inability of Western Michigan to hold onto the ball. Whether or not Michigan had a direct hand in all of these turnovers — some of them were clearly unforced — John Beilein summed up their impact on the game nicely after the game, saying, “Those turnovers were big.” Passes intercepted by Morgan and Burke led directly to easy layups. Burke drew two charges, Caris Levert drew another. These plays disrupted a Western Michigan offense that was, frankly, finding some success inside. The Broncos made 53 percent of their two-point field goals in the first half and found some easy buckets thanks to the pick-and-roll. Michigan was struggling on both offense and defense, and the aggressive play of the Wolverine defenders in forcing turnovers solved both issues. Drawing charges racked up fouls on Western’s post players while stealing the ball on the perimeter didn’t allow the Broncos to get inside and led to easy offense. Michigan was able to put itself in excellent position to run away with the game in the second half by forcing Western Michigan to turn the ball over on 40 percent of its possessions in the first.

4. Trey Burke dominates the action in the second half

What more can we say about Trey Burke? The sophomore continues to elevate his game in a myriad of ways as the season goes on. Burke was nearly perfect on Tuesday, tallying 20 points on 8-of-11 shooting, seven assists, three steals and three rebounds in 31 minutes of play. The most impressive statistic? Zero turnovers. This has become a habit for Burke, who has racked up 23 assists to just two turnovers in his last three games. Regardless of the competition, that is an eye-popping stat. Burke’s ability to impact the game was on full display in the second half against Western Michigan — he did a little bit of everything. His mastery of the pick-and-roll was evident in the way he fit a pass to a rolling McGary between two Bronco defenders, which McGary finished with a dunk. His used his quickness to get constant penetration and his vision to always find the open man cutting to the hoop: once it was Glenn Robinson III, who finished strong with an and-1, another time it was McGary again cutting baseline and yet another time it was Jordan Morgan who bailed out a mid-flight Burke by streaking down the lane. Trey Burke is getting better and better as the season goes on, and there is every reason to believe he will elevate his game to even greater heights with the start of Big ten play just a month away.

5. Nik Stauskas makes plays in the second half

The play of Nik Stauskas has been a hot topic among Wolverine fans, and the accolades (back to back Big Ten Freshman of the Week) seem to just feed into the freshman’s confidence. Stauskas finished the game with 11 points, most of which came in the second half. After missing his first 3-point attempt with 6:20 left in the first half, Stauskas didn’t miss from long range again, hitting his next three from deep. Trey Burke did an excellent job of finding him on the fast break for an open look, but the freshman certainly does not have to be open for it to be a good shot. Later in the half, curling around a screen from Jordan Morgan, Stauskas hit a 3-pointer with a hand squarely in his face. But what is really impressing John Beilein and the rest of the coaching staff is all of the other things Stauskas can do. For example, he made an excellent play with about eight minutes left in the game. With Michigan coming down the court on offense in transition, Stauskas puts a nasty crossover on Western Michigan’s Brandon Pokely and drives to hoop, finding Mitch McGary for an easy dunk.