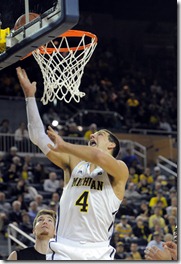 Michigan opened Tuesday’s game against Western Michigan slowly but eventually found its groove to cruise to an easy 73-41 victory. The Wolverines looked lifeless out of the gate but managed to sleepwalk their way past a Western Michigan team that simply didn’t have the horses to compete.

Trey Burke was nearly flawless on the night, scoring 20 points on 8-of-11 (2-4 3pt) shooting while handing out seven assists to no turnovers. But Michigan’s effort was balanced as 10 Wolverines saw action in the first half, eight played at least 10 minutes and nine found the scoring column. Michigan’s defense stifled Western Michigan on the other end of the floor. The Wolverines managed to force more turnovers (18) than allowed field goals (13) while holding the Broncos to a dreary .67 points per possessions.

Michigan’s offense was far from perfect but this isn’t an offense that needs to be hitting on all cylinders to be dominant. In fact, Michigan’s shooting (57% 2P, 38% 3P), rebounding and turnover numbers were all within a couple percentage points of its season averages. The free throw production, and efficiency, left a bit to be desired but the overall offensive performance still netted 1.15 points per trip. That mark was still the highest offensive efficiency the Broncos have allowed this season. The strongest endorsement of Michigan’s offense might be that the Wolverines have the best per-possession offensive performances that each opponent has allowed all season.

Michigan’s defense surrendered a number of easy looks in the first half – WMU converted 53% of its twos in the first – mostly because Wolverine interior defenders were getting pulled away from the basket hedging the pick-and-roll and the backside help was continually late. But Michigan’s aggressive play at the top of the key paid off in the turnover department. The Broncos turned the ball on over 40 percent of their first half possessions (29% turnover rate for the game) which offset the fact that they got to the free throw line fairly often. The Wolverines corrected those interior woes in the second half as Western Michigan shot just 27% on second half twos and 11% on threes. That improvement allowed Michigan to steadily increase its lead until the game was out of hand.

Michigan’s offense found the roll man on the screen and roll early and often on Tuesday night. Jordan Morgan and Mitch McGary were both extremely effective in slipping the screen early to roll to the basket – and U-M’s guards and wings found them. Michigan’s big man duo combined to go 9-of-11 from the field while all 11 attempts were dunks and layups and eight of nine makes were assisted by one of Michigan’s guards.

Next up for for Michigan is an opportunity to avenge one of last season’s more disappointing losses. Arkansas makes the trip North on Saturday after picking up a solid home victory over Oklahoma on Tuesday evening. The Hogs are just 4-3 but will provide a unique uptempo, high ball pressure test that Mike Anderson’s teams are renowned for.