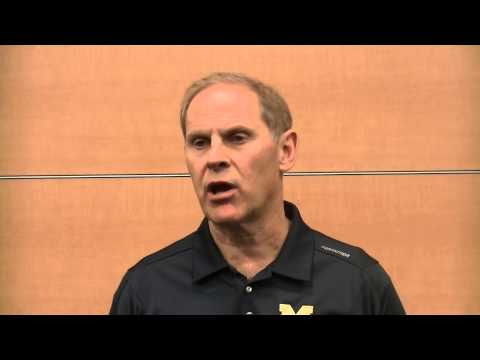 John Beilein was made available to speak with the media on Friday. The coach of the 8-0 Wolverines talked about what his team needs to do to limit turnovers against an up-tempo team like Arkansas on Saturday, as well as how his team is progressing in practice. Beilein said Max Bielfeldt, who suffered an ankle sprain during practice, is still not practicing and will likely not play against the Razorbacks.


Opening statement: “If you look at our schedule right now, just the lineup of games that we’ve had since we went to New York has been very challenging. Everyone’s got a very good record. Arkansas, you saw what they did to us last year, they’re going to bring quickness and an intensity to the game that is tough to match, tough to symbolize in practice. We’re going to have to be ready to play 40 minutes of basketball. There can be no let-up. We’ll have to take care of the ball, do a lot of good things and make shots. I think it’s what we love about college basketball. There are so many ways to be successful. One thing that coach (Mike) Anderson has done at Arkansas and Nolan Richardson and coach Anderson at Missouri is they take you out of everything you’re doing and say, ‘What’re you going to do?’ We need to have those answers.”