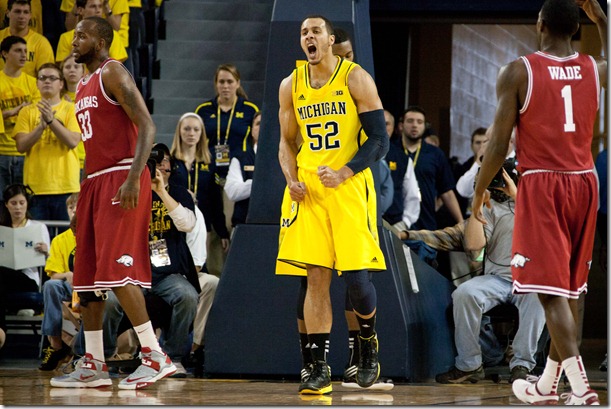 Michigan’s win over Arkansas was John Beilein’s 100th at Michigan but the head coach is certainly more excited about the future of his team and the wins that might lie ahead. Nine games into the season it’s becoming clear that this is probably the best team that John Beilein has ever coached and the best team in Ann Arbor since the early 1990s.

The standard to which we have to judge Michigan’s offense against is bordering on ridiculous. The Wolverines coughed the ball up on nearly one-in-five possessions and had a frustrating drought early in the second half yet still scored a sizzling 1.25 points per possession. As we sit and nitpick Michigan’s performance we have to remember just how good this team is. To put things into perspective, last year’s team scored the ball as effectively as Michigan did today just once last season.

Michigan’s winning combination hinged on offensive rebounding — something else that last year’s team simply wasn’t capable of. The Wolverines rebounded over half of their missed shots and scored 15 second chance points. This team continues to prove that its no typical Beilein led perimeter oriented offense as Michigan scored over half of its points in the paint and attempted less than 30% of its field goals from three point range. Michigan shot 50% on twos and 38% on threes for a slightly below season average effective field goal percentage of 52% but did attempt 14 more free throws than the Razorbacks.

There’s obviously great balance to Michigan’s offense with a blend of unselfishness and scoring ability across the board. John Beilein has had previous teams that pass the ball well and can flat out score; the difference is that this team can also rebound. Offensive rebounding multiplies the production potential of Michigan’s offense. If the Wolverines can consistently be an above-average to good offensive rebounding team, they will be nearly impossible to stop on the offensive end.

On the defensive end of the floor, there’s still plenty of work to be done. Arkansas shot the ball extremely well from outside, making an astounding 59% of its threes. Michigan’s defensive rotations broke down fairly often and the Razorback offense was explosive at times. At the end of the day, allowing Arkansas to score 1.05 points per trip isn’t an awful performance but it’s not the sort of performance a top five team should expect at home. The Wolverines did a good job of limiting BJ Young, 9 points on 10 FGAs, but continued to struggle defending athletic versatile four men like Marshawn Powell. Michigan’s ability to defend twos – 39% – without fouling – 4 FTA – was pivotal to countering the hot three point shooting.

This game was played at Michigan’s pace, 64 possessions, and the Wolverines deserve plenty of credit for slowing down Arkansas’ full court offense. The Razorbacks scored just two points on the fast break and were never able to truly discomfort Michigan despite a few uncharacteristic turnovers.

Michigan will have a tune-up against Binghamton on Tuesday before heading back to New York City next weekend to face West Virginia at the pristine Barclay’s Center in Brooklyn in its final game against a high major foe before Big Ten play.