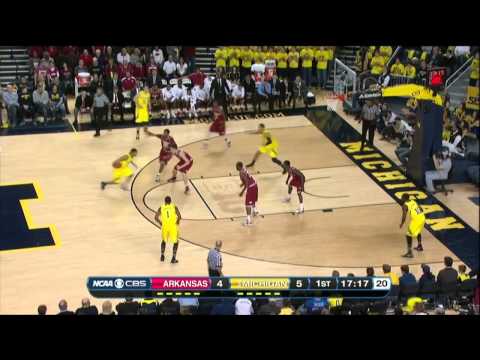 There hasn’t been a Michigan basketball player who has undergone a more shocking transformation in recent memory than Jordan Morgan. With the guidance of this coaching staff, the redshirt junior has made himself one of the most reliable, smart and tough big men in the Big Ten conference. Against Arkansas, Morgan happened to stuff the stat sheet, as well. From tipoff, Morgan played with purpose, and his inspired play to start the game lifted his team and set the tone for how Michigan was going to play for the rest of the game. Morgan immediately went to work on the offensive boards. After a missed 3-pointer by Trey Burke, Morgan sheds Arkansas’ Marshawn Powell and leaps between two more Razorbacks to snag the offensive rebound and score the reverse put-back. On the very next play of the game, Morgan hustles back on defense and is in perfect position to draw a charge on BJ Young. That sequence is a perfect illustration of what Morgan brought to the table for the Wolverines on Saturday: toughness and intelligence. The Detroit native ended up with 12 points and 10 rebounds — six offensive — on the night.

2. Michigan builds a comfortable lead with an 8-0 run midway through the first half

For the first few minutes, this was a tight game. Michigan and Arkansas were trading baskets, neither able to get any real momentum going either way. Then, Michigan was able to assert itself, starting at around the 14-minute mark in the first half. It was at this point the Wolverines first showed they were clearly the better team. It started with a play Michigan fans are seeing more and more of: Nik Stauskas, supposedly a pure shooter, putting the ball on the floor and taking it to the rack with confidence. Stauskas saw his opening when his defender overran his rotation and used his quickness and length to get to the rim. The second play in the run came off a tough rebound by Tim Hardaway Jr., and what results is what makes it so dangerous when Hardaway is able to grab defensive rebounds and get into space. After starting the break and using his speed to draw all three Arkansas defenders up court, he dishes a perfect pass off to Glenn Robinson III, who slams it home. Hardaway then shows the damage he can do when he steps into his shot and gets proper elevation by knocking down an open 3-pointer. By the time Caris Levert makes an excellent pass in transition to Morgan for the lay-in, Michigan is up by nine points, and the Wolverines held on to that lead through the end of the first half.

3. Michigan starts the second half anemic on offense

The Wolverines were uncharacteristically turnover-prone during the first few minutes out of the locker room to start the second half. Arkansas didn’t press Michigan as much as many originally thought they would, but the Razorbacks were able to force a few miscues during this stretch, after which Michigan’s seven-point lead was cut to just two. The game was relatively close for the majority of the remainder of the game until Michigan was able to pull away at the end. After a miscommunication between Nik Stauskas and Glenn Robinson III leads to the first turnover, Trey Burke almost gets his pocket picked. After he passes to Morgan, the redshirt junior unwisely attempts to dribble past his defender and ends up coughing up the ball. On the fast break, Trey Burke elects to take the ball to the hoop himself rather than dump it off to an open Mitch McGary and ends up getting stuffed. On the ensuing out-of-bounds play, Burke throws the ball away, which leads to an Arkansas fast break. Michigan essentially out-offensed Arkansas, and when its offense sputtered, Arkansas crawled back into the game. This likely won’t become a larger issue — Arkansas is one of the best teams at forcing turnovers in the country, and Michigan remains one of the best teams at avoiding them, with a turnover percentage of just under 16.

Ahead by just four points with seven and a half minutes left in the game, Michigan found a spark from an unlikely source: freshman backup point guard Spike Albrecht. Albrecht is largely judged by both Michigan fans and coaches by what he doesn’t do: namely, turn the ball over. His role on the team so far this season has been to spell Trey Burke when he needs a breather and not mess anything up when he’s in the game. He’s filled that role perfectly and, at times, has overachieved at the point guard spot. His play against Arkansas was everything Michigan fans could as for as the Wolverines outscored the Razorbacks by five points during the eight minutes that Albrecht was on the floor. On this play, Tim Hardaway Jr. made a pretty easy read: after coming around his pick, he saw that Albrecht was wide open and dumped the ball off to him. Albrecht knocked down the open shot which extended the lead to seven, an;d other than two Arkansas free throws immediately following the shot, the deficit didn’t fall below six points the rest of the contest.

If Jon Horford can churn out a few more defensive stands like the one shown here, he will undoubtedly command significantly more playing time. You can’t keep a guy like this off the court if he has the ability to completely shut down a talented big like Hunter Mickelson one-on-one. Horford’s body is resembling his brother Al’s more and more, and his strength is evident in the way he was able to move Mickelson out of his desired post position on both blocks. On the first, Mickelson had all the momentum and was streaking toward the basket — Horford stopped him in his tracks without fouling and blocked the shot. On the second, Mickelson attempts to establish post position through a pretty good drop step, but Horford is quick enough to meet him there and long enough to cleanly block the shot. To top it all off, Horford comes down with a tough defensive rebound despite getting slapped at and held by multiple Arkansas players, which was eventually called. It seems as though Horford is the clear choice as Michigan’s best one-on-one defender in the post. Horford, like Albrecht, made a valuable contribution off of Michigan’s bench late in the game to help seal the victory.