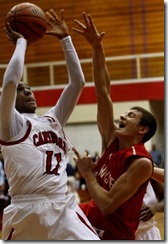 After the jump find video of Walton’s big game along with notes and videos from Michigan prospects in other classes.

Booker had 30 points, 10 rebounds and six assists in a win on Saturday with coaches from LSU, Florida, Mississippi State and Michigan State in attendance. Booker had a monster 48 point performance on Tuesday despite sitting the fourth quarter as he team broke 100 points.

Bluiett had 25 points, 13 rebounds and eight assists in a win over Coventant Christian. Bluiett added 31 points in a 91-33 rout of Beech Grove.

Doyle’s Bishop Verot squad won a pair of games last week, beating Gateway Charter 84-56 and Oscelola by a final score of 57-49. Doyle had 16 points on 7-of-9 shooting and eight rebounds in the win over Gateway.

Edwards had 24 points in a loss to Lakota West and also visited Dayton unofficially for its game on Saturday.

Reports were that Bacari Alexander was out to watch Sumner, a class of 2014 Detroit Country Day guard, play on Saturday evening. Country day beat Ferndale, 84-62 but stats were not available from Sumner. Earlier in the week, Sumner had 23 points on 7-of-11 shooting with four assists and three steals in a 100-87 win over Southfield-Lathrup.

Edwards led East Chicago Central with 11 points but was playing sick in a 47-29 loss to No. 3 ranked Munster.
Luke Kennard

Kennard had 27 points including a pair of triples in Franklin’s 68-54 win over Bellbrook.

Boudreaux’s Lake Forest team took a togh loss to Zion-Benton by three points. Stats are not available from Boudreux’s game.

Fazekas had a double-double, his third straight, with 11 points and 11 rebounds in Marquette Catholic’s 60-49 win over River Forest.

Holba scored had a game high 14 points and 10 rebounds in Chesterton’s 55-49 loss to Michigan City.

AJ Harris
Harris had 12 points and eight assists in a 56-41 win over Chaminade Julienne. The jet quick point guard also had 14 points, five assists and four steals in a 65-51 win over Ponitz Career Tech.

Coleman had Coleman had a game-high 25 points in an overtime loss to Indianapolis Tech with 20 of his 25 points coming after halftime.

Evelyn had 37 points including a buzzer-beating three pointer to send the game to overtime against Orchard Lake St. Mary’s as Southfield-Christian pulled off the victory. Here’s footage of Evelyn from earlier in the season:

Beilein was in attendance on Saturday evening to watch Detroit Consortium and class of 2016 super recruit Josh Jackson. Consortium handled Douglass for a 55-32 victory. Here’s footage of Jackson’s game as well as from an early scrimmage: