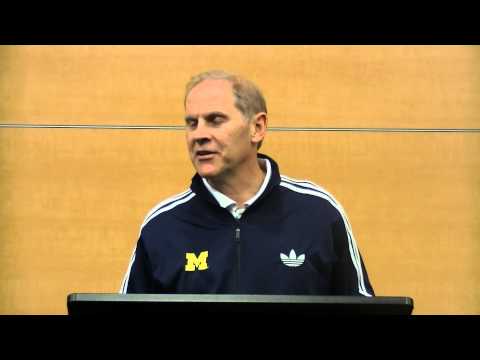 John Beilein was available to speak with the media Monday. The coach talked about his team’s progress to this point, how he sees lineups shaking out, and how the practices with this team are more intense than any he’s experienced. Beilein also mentioned that Max Bielfeldt will attempt to practice, but if he can’t he will not be playing on Tuesday. You can watch using the embedded media player below or read selected notes and quotes after the jump.


Opening statement: “I think it’s rare in this time of the year where we’re actually in a bit of a rhythm here. We’re going Tuesday-Saturday, Tuesday-Saturday. This is another one of those days with a short turnaround but I think we got enough rest yesterday to have a full practice today and get ready for Binghamton. It’s part of the schedule. Exams are here, everything’s really tight, but I know we’ll have a good workout today. Yesterday we just lifted weights and watched film and worked with our younger guys. After the Arkansas game, I needed a rest, let alone our team. Now we’ve got to get amped up 100 percent and get ready for Binghamton.”