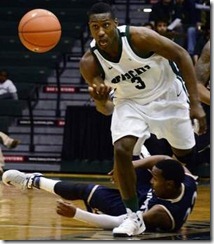 Michigan’s game against Binghamton tonight is the type that you hope to avoid when creating a college basketball schedule. Binghamton is ranked 344th out of all 347 Division I teams by Ken Pomeroy and has won just one game against a Division I team. Of the Bearcats’ eight losses, just one is to a team ranked better than 230th. Binghamton hasn’t played a major-conference team and the best team that it has played is Loyola Maryland, who lost by 15 points at Florida Gulf Coast. Perhaps most unfortunate of all, this might be a better Binghamton team than last year’s team. That Bearcat squad won just two games and lost its first 26 straight to open the year.

There’s little to gain from a Wolverine perspective, and Michigan’s RPI and SOS figures are certain to take at least a mild hit. But schedules must be filled out and guarantee games are a necessary evil in the world of college basketball. At the very least, the game should provide ample opportunity for some Michigan players that might not have had huge opportunities for playing time to start the season to earn some quality minutes.

Binghamton is bad defensively, ranked 333rd, but worse offensively at 341st. The Bearcats have surpassed 1 point per possession just three times this season and about the only thing they do well is get to the free throw line. Shooting 44% inside and 30% from outside the arc, Binghamton should struggle if Michigan is able to avoid fouling as well as it has all season (and there’s little reason to expect anything else). The Bearcats are a non-factor on the offensive glass (26% offensive rebounding rate) and turn the ball over on just shy of a quarter of their possessions.

Defensively, Binghamton’s lone strength is on the defensive glass. The Bearcats rebound 73% of their opponents’ misses but struggle to get to that point. Opponents are shooting 49% on twos (220th), 36% on threes (255th) for a 51% effective field goal percentage (256th) against the Bearcats. Binghamton doesn’t foul too often but also struggles to force turnovers as a consequence. The offensive and defensive numbers aren’t great but when adjusted for strength of schedule, ranked 322nd by Ken Pomeroy, they are even worse.

Freshman guar Jordan Reed leads Binghamton in scoring and uses far and away more possessions than any of his teammates. The 6-foot-4 freshman does the majority of his work on the glass and around the basket. Despite his 6-foot-4 frame he’s likely the Bearcats’ second best rebounder but is making just 49% of his twos and 59% of his free throws while failing to knock down a three this season.

Jimmy Gray leads the team in minutes and averages 10 points per game. The senior is the team’s best setup man but is also fairly turnover prone. 6-foot-8, 240 pound Roland Brown is the primary threat in the middle and on on the glass. At least 10 players have seen at least some time in the rotation but Binghamton this season, but just one BU player has an offensive rating over 100, seldom used Alex Ogundadegbe. For comparison’s sake, Michigan’s top nine players in minutes played this season all have an offensive rating over 100.

For Michigan, the players to watch are those that haven’t had extended playing time. Primarily Spike Albrecht, Caris LeVert and Jon Horford. All three players seem to deserve and need extended playing time but have struggled to find space in the rotation. It would be surprising if John Beilein didn’t give all three of those players significant run while resting some of his starters in tonight’s game. Albrecht has been extremely impressive in small bursts while LeVert looks like someone that desperately needs game repetitions. Horford has proven his mettle on the defensive end of the floor, but look to see if he’s able to get more involved offensively.

Ken Pomeroy’s robots like Michigan’s chances so well that they added a decimal point to the precision of their prediction, giving Michigan a 99.7% chance of victory and predicting an 84-47 final. This is, by far, the easiest game left on Michigan’s non-conference schedule and should serve as little more than a tune-up before the Wolverines head to Brooklyn to face a West Virginia team that is showing signs of slowly righting the ship after a rocky start.