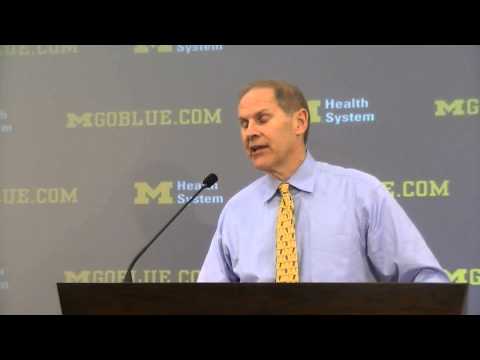 John Beilein spoke with the media after his team’s 67-39 win over Binghamton on Tuesday. The coach talked about how he was able to tinker with lineups, how he keeps his players preparing diligently for less-than-stellar competition and more. You can watch the full press conference using the embedded media player below or read selected notes and quotes after the jump.


Opening statement: “I thought Binghamton had a great game plan. I don’t know if you noticed, but they didn’t send people to the backboard — they tried to stop our transition offense and then they ended up maximizing every possession. One of the reasons we had the shot-clock violations was because of the fact that they really weren’t looking to score unless there was something wide open with 15 seconds to go. They shortened the game up, that’s why we only scored the 69 points. Thank goodness our defense really did a great job at the end of the first half. Lots of great things were seen out there that we can address for improvement or that we can see we’re making great progress. So, it’s all good. It’s a great learning experience, again. We’re anxious to get back to work, but with the study day tomorrow and exams starting on Thursday, our guys need a good day off.”