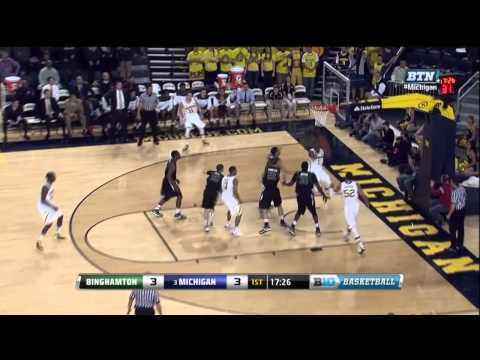 While this game was not even remotely competitive, John Beilein stressed that the coaching staff was still able to learn a lot and come away with things to work on in practice. Similarly, we can glean something from these plays even though it was sometimes hard to pinpoint any that could be called “key” with a straight face. This play is interesting for a couple of reasons. It illustrates the willingness of Binghamton defenders to leave home and pack the lane whenever the basket was threatened. When Trey Burke is able to slash into the painted area, the post defenders both step up to help, leaving Glenn Robinson III wide open roaming the baseline. Burke finds the freshman for the two-handed slam. This, and plays similar, epitomize the efficient and almost effortless way Robinson tends to score his points. He finds the weak spots in the defense so effectively and has such a gift for recognizing disadvantages that he can often position himself for easy baskets — one reason for his effective field goal percentage of just below 60 on the season. It can often be surprising looking at his stat sheet and see how many points he’s scored simply because he doesn’t spend a lot of time with the ball in his hands.

2) Caris LeVert dishes out assists in the first half

Burning Caris LeVert’s redshirt is looking like a better and better idea with each game. The coaching staff clearly feels like this team can do some special things this year and their assessment of LeVert’s ability to contribute to that seems accurate. The lanky wing can handle the ball, get by defenders with his quickness, and defend with his length. On Tuesday, he showed off his vision as well. Binghamton was a good opportunity for LeVert to log some minutes (he played 14) against an inferior team, and he took full advantage. On the first play of the sequence, LeVert does an excellent job getting by his defender and into the heart of the lane, where the defense collapses on him. He displays great awareness by dumping the ball off to an open McGary in the  paint for the easy lay-in. On the assist to Nik Stauskas, LeVert does the same thing but kicks out to the perimeter instead. He has a surprising ability to recognize who the open man is when the defense helps on him. The challenge for LeVert will be seeing if he can make these kinds of plays against Big Ten teams, whose defenders are much more difficult to blow by.

It was nearly impossible for Binghamton to score on Michigan’s defense during the latter portion of the first half. The Bearcats were so focused on slowing the game down they appeared to forget that, in order to have a chance, you actually have to score points. During this stretch, Binghamton missed five 3-point jumpshots — many of these misses were heaves taken as the last few seconds of the shot clock wound down — and turned the ball over five times. Michigan simply didn’t surrender open looks. Binghamton also made it a point of emphasis to stop Michigan’s transition game, which meant getting back on defense rather than try to grab any offensive rebounds off of their litany of misses. Of course, the one time someone broke that rule and grabbed an offensive board, it worked out nicely: Jordan Reed snuck behind the defense and elevated to throw down a tip slam.

4) Spike Albrecht with an effective 10 minutes off the bench

Spike Albrecht may not play much, but when he does, he makes a positive impact on the game for the Wolverines. He seems to be allergic to turnovers, as he’s only had one all season and has sworn off them since. He made a couple of impressive plays against Binghamton: one an assist through the teeth of the defense to fellow freshman Caris LeVert, and the other a 3-pointer from the top of the key against the zone. On the assist, Mitch McGary sets a pick for Albrecht and he gets around both his own defender and McGary’s defender. This leads LeVert’s man to step up and help, giving LeVert an easy lane to the basket cutting baseline. Albrecht recognizes it immediately and sifts his pass through three defenders for the lay-in. On the 3-pointer, extremely poor zone defense leaves Albrecht wide open at the top of the key. This time it’s LeVert who finds him and notches the easy assist after Albrecht knocks it down.

5) Trey Burke leads Michigan’s offense in the second half
Trey Burke, an early candidate for the “appeared in the most consecutive Five Key Play features” award, continues to show why he is one of the best point guards in the country. Binghamton never really had a prayer of containing him, but when Burke started knocking down 3-pointers in the second half, the task of guarding him was made definitively impossible. Even when he appears to have doomed himself on a play, as it appeared when he lost control of the basketball in the paint, he finds a way to make it work. On that play, he calmly locates the ball and flips it in mid-air to Jordan Morgan, who is streaking down the middle of the lane. Burke joked after the game that Nik Stauskas was bringing down his assist numbers in the first half by missing his 3-pointers, but in the second half the freshman made up for it with two makes from long range off of Burke passes. Catching the carom off the backboard and floating the ball over the outstretched hands of two defenders into the cup was just icing on the cake of Burke’s night. The point guard finished with 19 points, five assists and four rebounds.