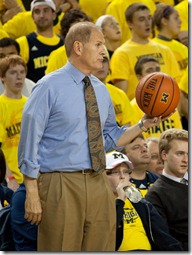 West Virginia coach Bob Huggins summarized the expectations for his team’s match-up with Michigan on Saturday quite accurately:

“People thought this would be a marquee national game,” Huggins said. “And we haven’t held up our end of the bargain.”

It’s hard to imagine two teams having more more divergent experiences this season than West Virginia and Michigan. The Mountaineers entered this year with relatively high expectations, returning talented big man Deniz Kilicli as well as obtaining a slew of skilled transfers. However, West Virginia lost its first regular-season game against Gonzaga by 34 points and looked like it needed a lot of work. After beating Virginia Tech on Saturday, the Mountaineers appeared to be righting the ship — until Tuesday, when they fell to Duquesne for the first time since 1993.

Michigan, on the other hand, enters the match-up undefeated and has so far, if possible, exceeded the high expectations it held to start the year.

While Bob Huggins sounded exhausted during this conference call, Beilein was upbeat and said his team is excited about the game and ready for challenge.

“The University of Michigan is very excited about this opportunity to go to New York, to go to Brooklyn at the new Barclay’s Center and play a quality program like West Virginia University,” Beilein said. “It’s that time of the year right now where we’re all getting ready for conference play and playing a team like West Virginia, you’re truly getting ready for high-caliber conference play.”

While the difference in the demeanor of the two coaches undoubtedly has something to do with their contrasting personalities, there’s no escaping that Michigan and West Virginia are approaching this game from very different places: Michigan craving a legitimate challenge, West Virginia trying to keep hope alive going into conference play.

Beilein compares this Michigan team to teams of his past

John Beilein has received so many questions about no longer playing the role of underdog this year that it’s impossible to count them, and going into this game against his former team as the decided favorite has not halted that trend. As he has held all season, his dismissal of hype and outside expectations continues to be emphatic. While he acknowledges that his team is no longer the underdog, he will not admit to being a proverbial “favorite.”

“I’m comfortable with our mission that the process will take care of itself, I don’t give a hoot about where people think we are. We are playing five freshmen, more than any team in the country. That’s very rare. We’re trying to get them every day to understand prosperity while also helping them get better.”

However, just because Beilein’s team won’t be sneaking up on anyone this season, that doesn’t mean this team is that different than teams past. This is especially true when comparing individual players from his former teams.

Beilein said he used to call Zack Novak by the name of Scott Ungerer, a former player at Richmond who shared similar characteristics of the former Michigan captain. This has been confirmed by Novak himself. Beilein mentioned that he often tells Trey Burke about Darius Nichols, a former player at West Virginia. Though his team’positioning relative to other schools may have changed, the players haven’t — at least not as much as one might think.

“As long as I’ve been coaching, 37 years now, I have changed every year, and maybe that’s why I’m still coaching,” Beilein said. “If you don’t embrace that part of it, you aren’t going to be coaching for very long.”

One thing that shone through during the conference call is the mutual respect that both John Beilein and Bob Huggins have for one another.

Both rose through the coaching ranks simply by winning everywhere they went. Though Beilein has never been an assistant, and Huggins spent a few year as an assistant at West Virginia and Ohio State, both started small and worked their way up. Huggins went from Walsh University in Ohio to Central Florida to Cincinnati; Beilein went from Le Moyne to Canisius to Richmond to West Virginia.

“I’ve seen John’s teams play for a long time. Obviously, I think everyone is impressed with the job that John does. He does a great job of letting guys do what they’re really good at doing,” Huggins said of Beilein. “I have great respect for him and what he does. He’s won everywhere he’s ever been, which when you’ve started in places where John started, you gotta be a good coach to continue to win at every step.”

Beilein said one of the similarities between himself and Huggins is their ability to implement their systems anywhere, regardless of the caliber of players they have.