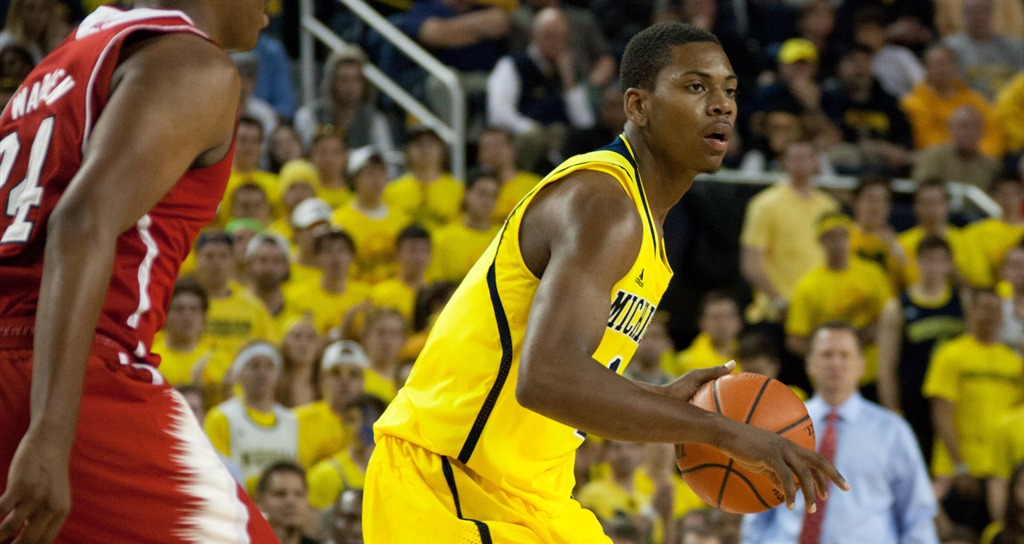 Michigan’s star point guard continues to lead the offense through both his scoring ability and his passing. Burke had an uncharacteristic three turnovers against Arkansas on Saturday, but given that modus operandi of the Razorback defense is forcing turnovers, that number looks a lot worse than it actually was. He led the Wolverines in scoring against Binghamton on Tuesday with 19 points, and his offensive rating of just under 127 is the second best nationally among players using at lesat 28% of their team’s possessions. Burke is what makes the Michigan offense go.

Robinson was at his efficient best against Arkansas. The talented forward led Michigan in scoring with 17 points on just 11 shots and shot 2-of-3 from long range. Robinson just has a way of moving without the ball and finding open areas of the defense, but credit also goes to players like Trey Burke, Tim Hardaway Jr. and Nik Stauskas, who have been finding him. The freshman didn’t have as great a game against Binghamton, but still took nothing off the table: six points on five shots and five rebounds (two offensive)? Michigan will take it.

Michigan’s veteran big man has provided a steady post presence throughout the early season, but he gave the Wolverines more than that on Saturday against Arkansas. In 23 minutes, Morgan tallied 12 points and grabbed 10 rebounds for a double-double — and six of those rebounds were offensive boards. But his numbers don’t tell the whole story: Morgan was the only Wolverine who could get it going early against a dangerous Arkansas team. He kept Michigan in it early on with six points and two offensive rebounds in the first four minutes of play.

As Stauskas logs more playing time, his 3-point shooting percentage continues to plummet toward the more humanoid 50-percent range — having put himself in the impossible position of sustaining a 60 percent 3-point shooting clip, he had nowhere to go but down. Besides his otherworldly outside shooting stroke, it’s hard to complain with two double digit scoring performances. One area the Michigan freshman has struggled is converting inside the arc. He was just 2-of-8 on two point attempts last week and is now 6 of his last 20 from inside the arc compared to 13 of 22 from long range in that same period.

Michigan’s backup point guard has been incredibly consistent in the periods of time he comes in to spell Trey Burke. He usually hits a 3-pointer at some point, dishes out an assist or two, and — most importantly — almost never turns the ball over. After logging an assist and a huge triple against Arkansas, Albrecht came off the bench and provided almost the same stat line except he took one shot fewer and dished out one more assist. He does exactly what John Beilein needs from him, and he does it very well.

The more he plays, the better he looks. Horford has emerged as probably Michigan’s best one-on-one post defender after forcing Hunter Mickleson’s own shot down his throat… twice …on the same possession. Horford hasn’t been doing much offensively, though he is a good finisher around the hoop, and needs to rebound better.

McGary has stands pat after a ho-hum game against Arkansas (six points, four rebounds). But against Binghamton, he was much more active on the glass, logging 10 rebounds. McGary always plays with energy, but he needs to work on consistently “playing big” in the post and cutting down on turnovers — he had two against Binghamton — and finishing more effectively.

LeVert proved that with more minutes, he can be a difference-maker on this team. Although he didn’t play much against Arkansas, he had a nifty fast-break assist and didn’t turn the ball over. Against Binghamton, he notched four assists and a basket in 14 minutes and caused plenty of trouble on defense.

Vogrich continues to come off the bench for garbage minutes and not much else as LeVert has replaced him in the rotation.

Bielfeldt did not play while recovering from a injury.