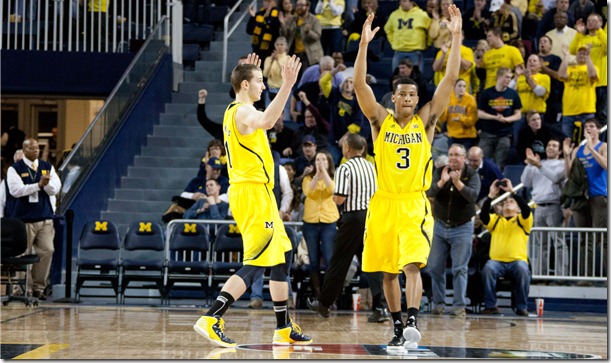 @TKBigCrew Which ’13 recruit has the greatest opportunity to make an impact as a freshman?

The easy answer is Derrick Walton. Walton is a great prospect and likely to contend for the Mr. Basketball award in the state of Michigan plus Trey Burke is a likely NBA early entry candidate. Combine those two facts with the amount of freedom that John Beilein allows his point guards, and why wouldn’t Walton be ready to step in and make an immediate impact?

Zak Irvin is a pure scorer and should play major minutes as a freshman but there isn’t the same sort of immediate opportunity on the wing – at this point. Mark Donnal has a great skillset but the front court depth roadblock isn’t going to erase itself overnight. Meanwhile Walton could be penciled in as a starter provided with the sort of opportunities that Trey Burke saw as a freshman.

@cjane87: Should we be worried about Tim Hardaway Jr. reverting to his 2011-12 shooting slump? He was doing so well with getting to the basket.

Last year he attempted 47% of his field goals from long range. This year that figure is down to 42%. He’s had a couple of poor shooting nights but his game is still more aggressive overall. He’s still rebounding significantly better (his defensive rebounding rate is over 50% improved), putting the ball on the floor in transition well and his overall confidence level continues to look higher on the court – even when shots aren’t falling.

Hardaway’s overall offensive efficiency numbers through 10 games are more similar to his freshman year than his sophomore season. But for now, hold off on the panic and see how Michigan’s junior guard performs in Big Ten play.

@MoMoneyMoFabbri What is Caris Levert’s upside?
@dsw_undefined: What’s the absolute ceiling for what we could expect of LeVert this season?

Where do you start? He’s already long and on the tail end of a growth spurt. He’s quick – with the ball and without – and is only going to get better as he adds muscle. He’s playing catch up right now as he begins to earn first team reps but the kid is going to be a player. He’s been praised for his defense in practice but remember that LeVert blew up on the Ohio prep scene last season because of his scoring ability more than anything.

John Beilein burned LeVert’s redshirt because he thinks he can make an impact sometime this season. He understands that this team’s ceiling is sky high and there’s no reason to limit it by holding LeVert out. It would be foolish not to go “all-in” on this team and that’s exactly what Beilein appears to be doing.

This year, I think the ceiling for LeVert is 10 minutes per game backing up Nik Stauskas and Tim Hardaway Jr. That probably equates to a couple of open shots per game but hopefully providing some disruptive defense off of the bench in short spurts.

@jlustig22: Do u see a need in the future for a stretch 4? We have a lot of young bigs but can any of them consistently play the 4 in this offense?

I think a stretch four is a definite priority in the class of 2014 as you can see by Michigan’s current recruiting targets (Vince Edwards) and near misses (Keita Bates-Diop, Jae’Sean Tate). However, I also think it’s important to remember the shift throughout college basketball and beyond toward more perimeter oriented offenses. Offensively, the four position continues to trend toward perimeter-based rather than interior based. Glenn Robinson III has the athleticism to play that sort of role perfectly and has done quite well there and it’s rare that he’ll come up against a “true power forward”.

Legitimate stretch fours with size and athleticism that can play offense and defense inside and out are surefire NBA prospects. Michigan is always going to be interested in those type of recruits and I would say that any 6-foot-8, 6-foot-9 type with a perimeter game will be a priority for John Beilein and his staff.

@derylgarland: where was all this pick and roll offense when Manny and Peedi we’re here? Would that helped those teams?

2011 was really the season when the screen and roll exploded in Michigan’s offense. It was also the first season under John Beilein where Michigan had a dynamic point guard that could dominate the ball while making himself and those around him better. First it was Darius Morris, now it’s Trey Burke.

That’s not to say that there was no ball screening in Michigan’s offense with Manny Harris and DeShawn Sims, there was still plenty. Perhaps one of the biggest differences is that most of Michigan’s ball screen looks came from the wing as Manny Harris played the three position. Harris would dribble from the wing with his right hand around a high ball screen and was usually aggressive going to the lane. The traditional point guard-five man ball screen action just wasn’t a pivotal part of Michigan’s offense with CJ Lee and David Merritt running the show as neither was a big threat to get all the way to the hoop. Because of the lack of a dominant point guard, I’m not sure if more traditional ball screen looks would have helped those earlier teams.

Of course astute observers would also point out that 2011 was the same year that Beilein reshuffled his coaching staff and it’s tough to imagine that the addition of Jeff Meyer, LaVall Jordan and Bacari Alexander had nothing to do with the shift in Beilein’s offense.

@DEpstein1: When UM is down at the end of a game, do you expect a PNR with Burke and Nik instead of Burke and a big?

I don’t see it. There were times last year that Michigan ran its pick-and-roll set with Zack Novak screening for Burke but I’m not sure Stauskas is the best option. If he’s the screener, the defense can almost certainly bet that Stauskas is going to pop rather than roll to the bucket. Second, Stauskas’s defender is more likely to just switch the screen as you are dealing with another perimeter defender rather than the opposing team’s four (why the Novak look worked) or five man.

Given Trey Burke’s ability to get in the lane, the best option would be Michigan’s traditional screen and roll look with Stauskas perched in the corner waiting for a kick out pass when the defense collapses.

Steve: I was just reading Mark Titus’s December 5, 2012 column in Grantland, where he has Michigan ranked 4th in his power rankings, and has very complimentary things to say. (“Favorite Beilein team ever,” among other comments.)

The one “negative” statement, if you will, is the following: What would most concern me if I were a Michigan fan is that the Wolverines basically only have six players who can be counted on to contribute in big games.

So, that means he’d count on Burke, Robinson, Hardaway, Morgan, Stauskas, and McGary. This leads to my questions:

1) If there is a game where (heaven forbid) 2 or 3 of the above starting list are out (sick, suspended, injury, off night, whatever,) do you agree with the analysis? The implication is that Michigan would be sunk if any of the starters were knocked out. We’ve seen how Horford is a great defender. We’ve know that Beilein thought there was no sense in red-shirting Caris LeVert, and is bringing him up to speed as quickly as possible. We’ve seen that Spike can spell Burke for 5 or so minutes a game. And we’ve heard Beilein praise Bielfeldt. However, so far, we haven’t seen Horford, LeVert, Albrecht, or Bielfeldt score in double figures. They appear to be great bench depth, but a step behind the starting five, plus McGary. Do you agree that none of the 2nd four can really produce?

2) If not, do you think, if called upon, that any of these latter four could or would step up to replace the starters? In a word, could any of them be “counted on to contribute?”

First off, I don’t think there are many teams that could lose two or three players from the top six of their rotation and be unaffected. Michigan is probably no different in the sense that it would struggle if a couple of key cogs go down.

I think Michigan could easily get by losing one of Morgan, McGary or Horford for a game or two, assuming the other two don’t get into foul trouble. You basically have three players for one position and all three have played well in spots – there’s no reason to think they couldn’t succeed in extended time.

Caris LeVert or Spike Albrecht could probably play major minutes in the backcourt but won’t be able to directly replace the scoring of the players they replace. If Burke is out, the pressure will be on Tim Hardaway Jr. or Nik Stauskas to elevate their games in the backcourt while Spike or Caris provide a band-aid at the two position.

3) As I look at the six Titus referred to, the most critical is Burke. Would you concur?
4) Beyond Burke, who could we least afford to replace?

Burke is the All-American and Michigan’s post important player but Glenn Robinson III isn’t far behind. I say that because of where he plays on the floor. Michigan doesn’t really have other wing options and the two big approach would have to be classified as “not quite there yet”. Robinson is playing major minutes, especially against elevated levels of competition. If Robinson were to go down, I’d expect Michigan would be forced to experiment with a look where Tim Hardaway Jr. slides to the four because I’m not sure that the Wolverines could go an entire 40 minutes with their big lineup on the floor – especially against quicker teams.