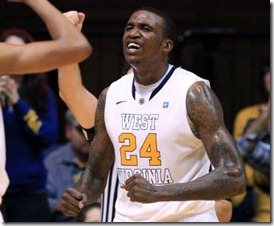 Michigan heads back to New York City for the second time in a month to take on the West Virginia Mountaineers. John Beilein left Morgantown six years ago but his magical runs to the Elite Eight and Sweet 16 are among some of the most memorable NCAA tournament story lines of the last decade. Now, Beilein is in Ann Arbor with a surging program while Bob Huggins is struggling to keep his team afloat after a rocky 4-4 start.

While West Virginia’s slow start, and recent loss at Duquesne, might have taken some of the luster off of a match-up ripe with made-for-TV drama, the game should provide Michigan with one final test against a physical high-major opponent before the start of conference play next month. The Wolverines should draw on an always strong New York City alumni-base for a strong crowd at the pristine Barclays Center.

West Virginia attacks the offensive glass like you would expect from a Bob Huggins coached team but still struggles mightily to score the ball. The Mountaineers grab 41% of their missed shots and rank within the top ten nationally in turnover percentage but just can’t shoot. Connecting on 43% of their twos, where they attempt three-quarters of their field goals, and just 26% of their threes, the Mountaineers rank 319th nationally in effective field goal percentage. Combine that poor shooting with an inability to get to the line and you are left with a team that has to fight for every single point.

Defensively, West Virginia is essentially average across the boards. The balanced Mountaineer defense doesn’t excel in any one area but doesn’t have many glaring weaknesses either. West Virginia ranks between 135 and 220 in the following statistical categories: effective field goal defense, forced turnover percentage, defensive rebounding, free throws allowed, 2-point and 3-point field goal defense. While it’s nice to be without any dramatic weaknesses, the final product is a defense that’s good-not-great and ranks 56th nationally in Ken Pomeroy’s adjusted defensive efficiency.

Stopping West Virginia starts on the inside with 6-foot-9, 260 pound Deniz Kilicli (left) and 6-foot-10, 245 pound Aaric Murray (right). Both players get after it on the offensive glass while Murray is the more effective defensive rebounder and shot blocker  Kilichi uses the most West Virginia offensive possessions but has been woefully inefficient with an offensive rating of 85 and a two-point field goal percentage of 41%. He does a good job of drawing fouls but his career free throw percentage is just 55% once he gets to the line.

Dayton transfer guard Juwan Staten starts at point guard for the Mountaineers. Despite leading the Mountaineers in scoring, Staten has struggled in his first season for West Virginia with just 18 assists to 16 turnovers and an effective field goal percentage under 40 percent.

West Virginia’s other guards aren’t shooting the ball much more effectively. Jabarie Hinds touts a 40% eFG%, Gary Browne sits at just a 37% eFG%, and Terry Henderson isn’t much better with a 39% eFG%. 6-foot-7 Keaton Miles is slightly more efficient at 43% while backup big man Kevin Noreen is West Virginia’s most efficient scorer but also its least used offensive player. Fifth year senior Matt Humphrey has already played college basketball at Oregon and Boston College in his career but has yet to find a consistent groove in the Mountaineer rotation.

If Michigan is able to accomplish what it has done all year, namely rebound West Virginia misses and avoid fouling, it should win this game easily. The Mountaineers will provide a challenge on the glass but don’t appear to have the offensive ability – or confidence – to beat the Wolverines without a dominating offensive rebounding performance.

Perhaps one of the most interesting storylines to watch during this game will be how often John Beilein opts to roll with his hit-or-miss two big man lineup. Just recently he told reporters that he was still trying to figure out who was more effective at the four spot, Jordan Morgan or Mitch McGary. However, West Virginia’s massive front line could provide a challenge that requires two bigs, especially if Glenn Robinson III is unable to capitalize off of his quickness advantage at the four.

Ken Pomeroy projects a 66-56 Michigan win and gives the Wolverines an 84 percent chance of victory. The win would move Michigan to 11-0 which would be its best start since 1988-89 when it won its only national championship.

This & That: Beilein has never lost to a former team, going 2-0 against Canisius while at West Virginia. He’s also 1-1 against Bob Huggins, beating Huggins’s Cincinnati team by three points in December 1994 and losing by 33 in 2001 while at Richmond. Michigan has more wins against major-conference opponents than any other Big Ten team. Some tickets are still available for Saturday’s game and can be purchased at a discounted rate here with the code BKHOOPSWF or after-market here.