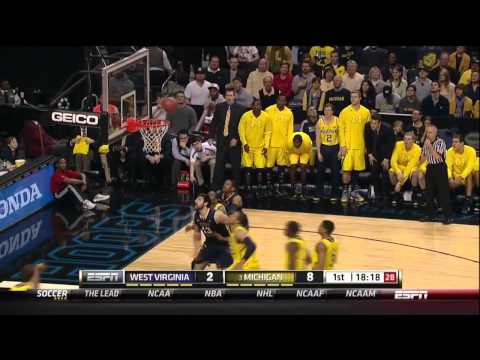 Michigan was able to jump on West Virginia early and assert itself from the opening tip. This initial run happened because of two things: knockdown outside shooting and Trey Burke. Tim Hardaway Jr., after missing his first 3-point attempt on Michigan’s first possession of the game, nails the very next one he takes on the ensuing trip down the court. The fact is, Hardaway can be lethal from downtown. Sometimes, he’s not. If he misses shots for a couple games, he’s in a “slump.” The chances that he’ll hit are good enough for him to keep shooting. It certainly paid off in this game as Hardaway shot 50 percent from beyond the arc in Brooklyn. Hardaway also shows why Michigan’s rebounding ball-handlers can be so dangerous starting the break. He arrives at half court before West Virginia can get their defense set, and Stauskas buries a 3-pointer. This was Burke’s run, though: playing terrific deny defense, he makes a great steal and takes it to the rack. Later, he finds Jordan Morgan cutting baseline for an easy slam. This run set up Michigan’s almost effortless offensive production the rest of the game.

After a 10-0 run by West Virginia with six and a half minutes to go in the first half, the Mountaineers cut the lead to just five at the 4-minute mark. Michigan’s offense was sputtering after a couple of missed threes and a turnover and the Wolverines needed someone to step up. Glenn Robinson III did just that with an excellent move and drive to the basket. The freshman wasn’t particularly impressive but made his presence felt — he finished with eight points, seven rebounds, two blocks and an assist for the game. Receiving the ball in the corner from Hardaway, Robinson attempted to drive to the wing but was cut off. Improvising, he instead made a nice spin move and drove baseline past his defender. The help defense didn’t get there in time, and Robinson was able to lay the ball in easily. The move was particularly impressive because driving to the rim is an area where Robinson has been working to improve. When West Virginia again cut the Michigan lead to five, it was Nik Stauskas who stepped up. After getting the ball stripped and almost losing it, Trey Burke regained control near half court and got the ball to Stauskas, who was posted in the corner. Though he didn’t have a good shooting night, going just 2-of-7 from long range, this time the freshman filled it up.

3) Michigan closes out the first half with buckets from Trey Burke, Tim Hardaway Jr.

Michigan closed out the first half really well after experiencing an onslaught from West Virginia that caused the Wolverine lead, as many as 17 points, to shrink to just seven. With some ingenuity from the two stars of Saturday’s show, Trey Burke and Tim Hardaway Jr., Michigan was able to grow its lead back to double-digits before the break and regain some of the confidence that was so evident to begin the game. All three of these were just terrific one-on-one plays. Burke is an expert at creating space for his midrange jump shot whether it’s pulling up on a fast break or crossing over and fading away, like he does on the first play of this sequence. That is an NBA move and it proves he can get his shot off against taller guards. What was so impressive about Hardaway’s subsequent take to the basket was how he was able to maintain body control through his spin move and as he floated the ball over the post defense. He is so good at throwing his big body around to create space mid-air. On the last play of the half, Burke simply embarrasses his defender with an absolutely nasty, Iverson-like crossover at the top of the key.

The Mountaineers were able to apply late pressure on Michigan thanks to some timely three point shooting production. West Virginia is shooting just 27 percent from three point range this season, and actually wasn’t much better for the game at 29%, but three late triples caused Michigan to sweat down the stretch.  The three long range makes in this sequence each occurred due to different defensive breakdowns. On the first, Michigan was inefficient getting set on defense in transition. Nik Stauskas sold out on the wing, leaving the corner open for Keaton Miles. On the second 3-pointer, also in the corner, Michigan broke out its 2-2-1 zone trap, trying to force a turnover or quick shot. Unfortunately, once West Virginia got the ball over the defense and past half-court, Jordan Morgan’s rotation to the baseline shooter was late and allowed a wide open look. On the third three, Michigan is back in man-to-man, but when Juwan Staten gets by Trey Burke, Stauskas helps and leaves his man on the baseline wide open. Michigan’s defense wasn’t great against the Mountaineers, and if the Wolverines have a weakness, this is it.

With the lead cut to single digits with around five minutes left in the game, Michigan called a timeout to gather itself. Out of the timeout, John Beilein went with his bread and butter: the high pick and roll. West Virginia counters by hedging hard against Burke, trapping him near midcourt. The Mountaineer strategy works well and if they were defending against any other point guard in the country, it might have been successful. But just as Burke reaches the Brooklyn “B” emblem in at mid-court, he fires a one-handed laser to a rolling Morgan. The redshirt junior catches the pass and makes an excellent pivot to his left before finishing a contested lay-in. This play was one of many great ones Burke made in this game. It was his night, as the All-American point guard finished with an astounding 27 points, eight assists, five rebounds, three steals and — amazingly — zero turnovers.