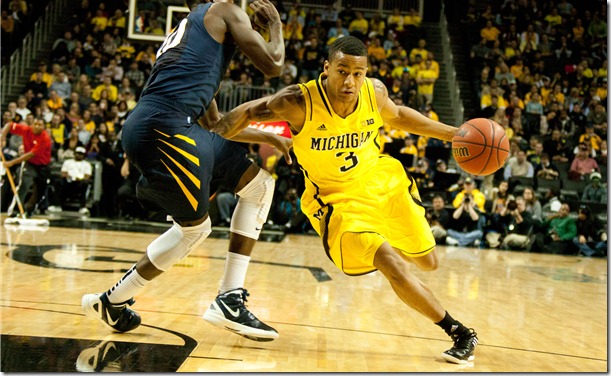 The Brooklyn Winter Hoops Festival paired two teams going in opposite directions. From the opening tip, it wasn’t hard to tell which team was which. Michigan jumped out to a 13-4 lead and rarely if ever looked back despite a handful of mini-runs by the Mountaineers while cruising to an 81-66 victory. West Virginia cut the first half lead to five points and was able to reach a single digit deficit in the second but the Wolverines were always in control. Mostly because their All-American point guard played his best game of the season – a tall task considering his fast start to the season.

Burke finished with 27 points, eight assists, five rebounds, three steals and zero turnovers. He was lethally efficient from the field, connecting on 12 of 16 field goals. While Burke looked every bit the NBA prospect he’s capable of becoming, he had plenty of help from his backcourt mate. Tim Hardaway Jr. had one of his strongest performances of the year as well, finishing with 25 points on 7-of-12 shooting.

Michigan’s offense continues to hum along smoothly – even if in a different format. West Virginia’s ball pressure defense forced turnovers and disrupted Michigan’s traditional offense but the Wolverines had an answer. John Beilein turned to his horses and unleashed a dribble drive offense that was lethally effective. Hardaway and Burke combined for 19 of Michigan’s 28 made field goals and handed out 11 assists on top of that. The approach was different but the result was the same.

The Wolverines scored an efficient 1.22 points per possession thanks to lethal shooting – 21-29, 72% on twos and 7-21 33% on threes for a 63% effective field goal percentage. The Wolverines aggressive dribble drive offensive approach also yielded significantly more free throw attempts than we’ve seen this season. Michigan rebounded 35% of its missed shots but did struggle with turnovers, coughing the ball up on more than once in every five possessions. The Wolverine offense was forced to rely on its superstars but they were more than up for the challenge under the bright Barclays Center lights.

There are still concerns on the defensive end of the ball for Michigan. West Virginia is not a good offensive team yet managed to score a point per possession. There were times Michigan’s defense looked steady but there were other times when the Wolverines were on the ropes. The Mountaineers weaved back into the game with timely threes and breakdowns in Michigan’s zone looks. To Michigan’s credit, West Virginia rebounded a more respectable 31% of its missed shots and still had an effective field goal percentage (44%) around its season average of 42%.

The Wolverine defense isn’t bad but it continues to lag behind the offense. If Michigan is really the No. 2 team in the country (seemingly inevitable after Indiana’s upset loss to Butler) then it will have to improve on its defensive consistency in Big Ten play.

The heavy lifting portion of Michigan’s non-conference schedule is in the books. The Wolverines will host Eastern Michigan next Thursday before resting over the holidays and wrapping up the non-conference slate against Central Michigan on December 29th.