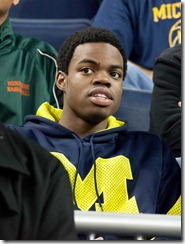 SOUTHFIELD – Southfield High School was packed with fans all day on Saturday for the second annual Prep Spotlight Battle of the Best Showcase. The five-game event featured several of the top teams and prospects in the state of Michigan including Michigan-bound point guard Derrick Walton.

Walton struggled in the first half, scoring just four points and his team trailed by four at the break, but lightning-quick point guard single-handedly turned the game around early in the second half.

He scored 10 points and dished out three assists in the third quarter alone, drawing the biggest crowd eruption of the night when he hit a three-pointer and drew a foul, giving his team their biggest lead of the game. The senior point guard finished with 17 points on 5-of-9 shooting, and added seven assists and three rebounds, while only committing two turnovers.

Walton didn’t force the action and let the game come to him while getting a feel for the defense before taking over down the stretch. He created his own offense, and continued to make his teammates better, getting everyone involved and creating easy shots for his team.

“Tonight it looked like there was more focus on me, so I just played off the ball and got guys involved, just not really forcing anything. I didn’t want to force it,” Walton said after the game. “The main thing was to get the win and that’s what we got so that’s all that matters.”

Walton said he knows that because he’s a Michigan signee, he will get every opponent’s best shot, and will have a bulls eye on his back every time he takes the court. He said he relishes the opportunity to play against top competition and show the country what he can do.

Walton played every minute of the game, and his second-half surge lifted Chandler Park to a 58-52 win over Young and Rochester, leading his team to an early 2-0 record.

The biggest knock on Walton last summer was that he needed to improve his shooting consistency, which is something he said he works on every day. His confidence has continued to grow and his overall game improves every time he steps on the floor, which has him eying a State Championship, and a Mr. Basketball selection.

The last game of the night featured Josh Jackson’s Consortium squad facing off against Detroit Pershing, the No. 1 team in Class A.

Jackson, who’s 6-foot-6, has an impressive arsenal of skills, and can play every position on the floor at a young age. He showed off his great handles with the ability to put the ball on the floor and create his own shot. He is long, athletic, and extremely active on both sides of the ball. One of the most impressive aspects of Jackson’s game was how quickly he was able to get his shot up, especially in traffic.

Jackson, who played all 32 minutes on Saturday, doesn’t need a lot of room to get his shot off, and showed the ability to score with multiple defenders around him, and finish with contact.
As good as Jackson was on offense, he was equally impressive on the other side of the ball as well. He spent most of the game defending Pershing’s top perimeter ball handlers, and was also impressive defensively in the low post, altering, and blocking several shots.

Jackson’s team was down by as many as 15 points in the second half, but the freshman helped spark a late fourth quarter run, hitting a couple big shots to bring his team within one point, late in the game.

The one mistake Jackson made was in the most crucial part of the game, committing a huge turnover with his team down three points with 12 seconds left that sealed a loss for Consortium.

He finished with 18 points, going 6-for-8 from the floor, and added four rebounds and two blocks, but Consortium fell to Pershing 74-73.

Lansing Sexton forward Trevor Manuel has been on the Michigan radar for sometime and is drawing significant interest from high-majors across the country including hometown Michigan State as well. Manuel and Sexton faced a talented Romulus squad, which focused its attention on keeping the ball out of his hands.

Sexton had trouble getting into an offensive rhythm in the first half, and couldn’t get Manuel involved consistently. Manuel, who’s currently 6-foot-8 as a sophomore, spent most of his time floating on the perimeter which prevented him from taking advantage of his size and strength on the block. He has a good stroke from long range, but he needs to play more inside-out, and become a low-post presence before drawing defenders outside.

Manuel started to show his potential in the second half with his team down double digits. He did everything he could in the third quarter to get his team back into the game, turning defense into offense, recording three blocks and scoring six points in the third quarter.

He showed a good, fluid free-throw stroke converting all eight of his attempts from the line, but he couldn’t do enough to overcome an 18-point deficit.

After a scoreless first half, Manuel finished with 13 points as Sexton fell to Romulus 67-52.