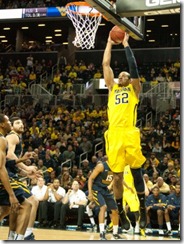 Michigan is now the top ranked team in the Big Ten. The 11-0 Wolverines moved to No. 2 in both the USA Today and AP Top 25 polls that were released this afternoon.

Indiana, who held the No. 1 spot since the preseason poll was released, fell to No. 6 in both polls after losing to Butler on Saturday. Duke earned the top spot in the polls garnering 62 of 65 first place votes in the AP Poll and 30 of 31 first place votes from the coaches.

Michigan earned three first place votes from the media and one from the coaches. Syracuse, Arizona and Louisville round out the AP Poll top five while Louisville leapfrogged Arizona in the coaches poll.

The last time Michigan was ranked as high as No. 2 was in January of 1993.