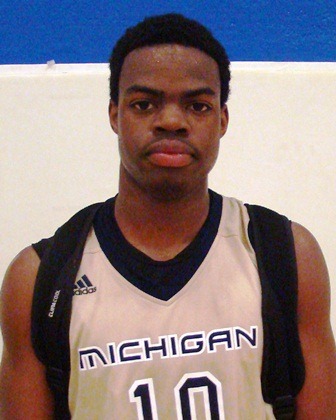 In a battle between the top two Mr. Basketball hopefuls in the state of Michigan – Michigan commitment Derrick Walton and Kentucky commitment James Young – Walton came away victorious. The Michigan-bound point guard scored 17 points and handed out seven assists in Chandler Park’s six point win. After the game Walton discussed the upcoming season, his goals, Michigan basketball and much more with UM Hoops.

Talk about your team’s performance in the win tonight

“We’ve been telling people we’re not just a one-man show this whole year. [Darius Dean] just stepped up like I know he could. He hit jump shots, attacked the basket and played D. I wasn’t surprised that he played that well, so I’m just happy for him.”

It seemed like you were rolling with the game tonight. You scored when you had to but talk about just being a playmaker?

“Tonight it looked like there was more focus on me, so I just played off the ball and got guys involved, just not really forcing anything. I didn’t want to force it. The main thing was to get the win and that’s what we got so that’s all that matters.”

Last year after you committed to Michigan you said the bulls eye is on your back. It seems like it’s a little bigger this year now that you’re a senior and have more people coming at you.

“Yeah but I can handle it. I work hard enough not to get caught up on a bad day. I mean, I’ll take it, and you know, it’s kind of fun.”

The other team was throwing a lot of different zones at you. Is that something your team works on in practice so you can get your teammates open?

“To be honest, we really don’t work on that. I take the initiative on myself, if I’m not open, not to force anything, and just get guys involved. Like I said, it’s all about winning.”

A lot of people came out to see you and James Young tonight. Talk about the crowd atmosphere.

“It had been hyped up for a long time. It was just nice to see a lot of people come out and support us. We were talking junk back and forth for a while. I’m happy to get it over with and get the W, and get bragging rights.”

You and James weren’t totally on tonight at the start of the game like you’re both accustomed to. Did you have butterflies coming into the game?

“I think both of us were just too anxious to come out and play. A lot of easy bunnies missed, and free throws, stuff like that. As the game went on though, we just played our regular game.”

Moving forward, do you think this victory in front of a crowd like this will help your team for the rest of the season?

Talk about the run you sparked at the beginning of the second half. What changed for your team coming out of halftime?

“I honestly thought I wasn’t playing good so I took the initiative on myself to pick up my game, and play defense a little better and actually be more aggressive. After I was more aggressive, everything opened up for everybody else.”

What’s the biggest thing you’ve improved on since the summer?

“You probably couldn’t tell tonight, but probably my shooting. I shoot the ball much better. But tonight was probably an off night for me. But I’m not done, you know we have another game next week.”

What’s the biggest thing you still need work on?

“Consistency. Just not drifting off in the game with my own inner things like when I’m not scoring and stuff like that. So I just need to stay in the game, and keep making sure I’m making plays.”

How much does playing against a guy like James Young give you a preview of the kind of competition you’ll face next year?

“He’s bigger than I thought he would be. When I had to guard him, I mean, maybe I need to hit the weights more.”

“I’m not able to go up there that much, but I watch them on TV every chance I get.”

What do you think of the atmosphere at the Crisler Center when you do go?

What do you like about the way that Michigan’s been playing so far?

“Just the way we’re playing together, and everybody sticking in their roles and doing the little things that’s going to make us a nice NCAA Championship contender.”

How often are you talking to the Michigan coaches these days, and what are they telling you?

“I probably talk to coach Bacari (Alexander) the most. Sometimes we just kid around and talk about little stuff. But other than that, probably every other day.

What are your goals for the rest of your senior season, both personally and for your team?

“Team-wise, you know, hold up the trophy at the end of the year. And personally, just probably win Mr. Basketball and just be ready to step on campus as a freshman and contribute heavily.”