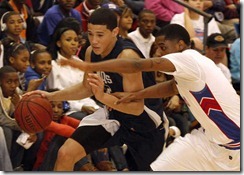 Irvin continues to dominate the Indiana high school basketball scene while posting monster scoring totals game in and game out. Irvin’s Hamilton Southeastern team is now 8-1 on the season and Irvin is leading the way.

Here’s footage of Irvin in action via Go Blue Wolverine:

Donnal helped Anthony Wayne to a win over Northview and WNWO TV posted some footage from the game including a couple of Donnal’s baskets on the night.

Donnal added 28 points and 17 rebounds in a 66-30 win over Napoleon on Monday evening.

Walton had 17 points and seven assists in a win over Rochester and Kentucky commitment James Young. UM Hoops was in attendance and we posted a game story, interview and scouting video of Walton’s night.

Booker suffered a major injury scare in a 59-52 loss to Harrison Central with a scary knee injury.

Booker went down suddenly in the third quarter with what appeared to be a serious knee injury.

“He was moving around like he was agonized,” Cotton said.

Fortunately for Booker and and the rest of the Tigers, the injury has been determined to be just a knee sprain.

“I talked to his dad today and he said he was up walking and the trainer was coming back (Saturday) to look at it,” Cotton said. “He’s up walking but we’re going to take all precautions.”

Booker had nine points in the loss before the injury and while the injury is just a sprain but could still be a concern going forward. Booker has since Tweeted that the injury is not that that serious.

Bluiett had 31 points in a 77-35 win over Triton Central, all coming in the first three quarters of the game.

Tate recently committed to Ohio State for basketball but Sam Webb reports that Michigan has now offered him for football as a rush end/linebacker.

Doyle’s Verot square topped Cape Coral but stats were not available for Doyle. Bishop Verot has a big week ahead as it hosts the annual City of Palms Classic, an event which attracts some of the top programs across the country. Verot will open the tournament tonight against Fort Lauderdale St. Thomas Aquinas at 8:15.

Edwards had a 15 point, 15 rebound double-double in a two point loss to Trotwood but was even more impressive earlier in the week with 23 points and 22 rebounds  in a loss to Thurgood where Matt Painter was reportedly in attendance.

Allen’s name hasn’t been quite as prevalent in recent months but the junior guard from Illinois recently reported that he’s had an uptick in interest from the Wolverines in this video interview from Chicago Hoops:

Allen recently scored a game high 17 points in a 47-44 win over Ladue (Mo.) just one day after scoring a team high 19 points in an overtime loss to Jacksonville. Allen’s Glenwood team is 10-1 on the season.

Another 2014 guard on the Michigan radar, here are recent highlights of Sumner against Ann Arbor Pioneer including a quick update on his recruitment:

Wideman’s Lake Central team was upset by Chesterton as he scored 20 points in the four point upset loss.

Boudreaux had 14 points, 11 rebounds and three blocks in a 36-28 win over Gurnee. Michigan was the first name out of the versatile 6-foot-7 forward’s mouth in this video interview:

Ash and Watson’s St. Joseph team fell to St. Patrick in a 61-54 game, stats were not available for Watson and Ash in the loss. Glynn Watson had 13 points a day earlier in a 67-61 loss at Providence Catholic.

Fazekas had 20 points and 11 rebounds for his fifth double double of the season in an 88-51 win over La Crosse.

Holba missed significant time on the AAU circuit with injuries this summer but is playing well now that he’s healthy. He had 21 points and 13 rebounds in a four point upset win over Lake Central. He also added seven points in a 48-38 win over Portage. He recently updated his recruitment with Scout.com ($) and is drawing interest from Indiana, Purdue, Michigan State, and Michigan.

Here are highlights from the Chesterton-Lake Central game:

Coleman had 17 points to power Cathedral to a 68-63 win over Ballard.

Evelyn’s Southfield Christian team was profiled by the Detroit News. He recently scored 34 points in a five point loss to Southfield-Lathrup.

Josh Jackson was impressive in Consortium’s loss to Pershing and we featured his performance in our story from the Best of the Best Showcase.