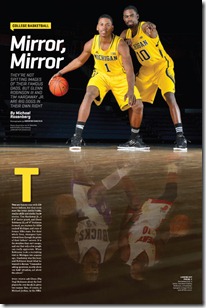 How Duke, Syracuse, (Michigan) and other top contenders compare to past champs  – ESPN – “To me the most impressive thing about the Wolverines’ very impressive numbers is that half of their games against Division I opponents have been played away from home. John Beilein’s team has made shots inside the arc at a rate that can only be called torrid. Michigan’s high-volume scorers on the interior are Trey Burke, Tim Hardaway Jr. and Glenn Robinson III, and all of those guys are north of 57 percent on their 2-point shooting. Rejoice and be glad, Wolverines fans. The early-season numbers say your team is on a Final Four trajectory.”

Michigan’s Jon Horford is week-to-week with knee injury, John Beilein not sure how long he’ll be out | MLive.com – “”We don’t know everything just yet,” Beilein said. “The first look is that he’s going to be out, but we don’t know how long.
“It’s day-to-day, week-to-week, whatever. He’ll start rehabbing, the doctors will look at it with the swelling and see how much is there.
“That’s all we know right now.””

Player of the Year Race: Burke gets back on track – 3. Trey Burke – Burke went through a mini-slump, but he’s neck-and-neck with Michael Carter-Williams as the nation’s top point guard right now. He had 27 points, eight assists, five rebounds and no turnovers in an easy win over West Virginia in New York. He’s putting up 18 points and seven assists for a team that’s ranked second in the nation.

Jay Bilas and Chad Ford – Who is the nation’s top point guard? – ESPN – Jay Bilas tabs Trey Burke as the nation’s best PG: “Even though those three are terrific players and would be worthy choices, I am going with Burke as the top point guard in the country right now. It’s not that he has made some crazy jump in numbers or productivity from last season, but his overall floor game and leadership are at another level entirely. Burke is in total control out there, and playing with better pace. Last season, he was in charge of the position for the Wolverines. This season, he is leading the Wolverines from the position — there is a difference.”

Trey Burke And the Dismantling of West Virginia « Cutting Down Nets – A great video breakdown of Burke’s performance against WVU: “Burke had his way with any and all West Virginia guards from Juwan Staten to Jabarie Hinds to Gary Browne. Burke’s ability has helped lead Michigan to an 11-0 start and very real Final 4 aspirations. Nik Stauskas and Tim Hardaway along with Glen Robinson III have helped matters but it’s Burke that is the driving force and improving their games while simplifying them at the same time.”