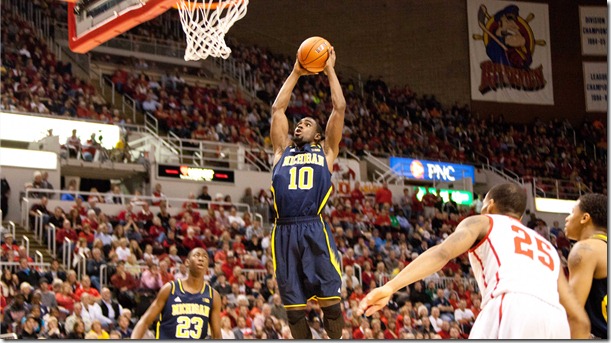 The numbers say that Michigan has played progressively slower basketball in every year since John Beilein arrived in Ann Arbor. The Wolverines were the nation’s 189th fastest team in Beilein’s first season, 2008, and rank 328th in adjusted tempo thus far this season. Through 11 games, Michigan is averaging roughly the same number of possessions per game as the most chided slow paced team in the country, Bo Ryan’s Wisconsin Badgers.

Despite what the tempo statistics say, something about Michigan’s slow tempo doesn’t add up. Listen to any pundit, announcer, opposing coach or analyst and you’ll hear them rave about Michigan’s transition offense. And they aren’t wrong; Michigan’s transition offense has been extremely effective. Although the tempo statistics don’t show a significant increase from year’s past, even casual spectators can see that this team has been more effective pushing the ball and scoring in transition. What gives? We take a closer look.

While traditional slow Big Ten teams like Northwestern, Nebraska and Wisconsin have possession per game tempo figures closer to the Wolverines, they all push the ball on less than 10 percent of their offensive possessions. Meanwhile Michigan’s 62.6 possessions per game is a far cry from the 68 possessions per game that the other five Big Ten teams with at least a 15% transition percentage average per game. Michigan’s combination of transition offense and slow pace is abnormal and scatter plotting the data makes it fairly obvious:

The other 11 Big Ten schools appear to show a general correlation between tempo and transition percentage while Michigan is squarely in the upper left quadrant – by itself. There are a couple of explanations for the discrepancies. First of all, if transition opportunities aren’t there, John Beilein is very content to run his offense and utilize the entire 35 second clock. Michigan has a point guard he trusts and more than enough scoring options to make plays late in the shot clock. Second of all, it means that Michigan has done a decent job preventing transition opportunities for its opponents while also forcing opponents to utilize a majority of the shot clock before attempting a shot. Extending the possessions of opponents can still shorten the number of possessions in a game relatively quickly.

The story here isn’t just that Michigan runs more than its tempo statistics would indicate. The Wolverines are also a significantly better team when they push the ball.

Good things happen when Michigan pushes the ball in transition. Obviously there are more easy opportunities in transition (the Wolverines average .96 PPP in half court sets – a very good figure in its own right) but the Wolverines have maximized their transition effectiveness. A counterargument to Michigan’s transition efficiency could be that the Wolverines are so selective as to when they push the ball that they are bound to be more efficient than teams that push the ball in almost every scenario (Michigan State, Indiana). But a majority of that credit has to be given to Trey Burke, who is able to control the game so effortlessly and make the right decisions whether to push or slow the game.

Burke, Stauskas and Morgan are all very good in transition but Tim Hardaway Jr. has been Michigan’s shining star in the full court offense. According to Synergy Stats, the Wolverine swingman is scoring 1.7 points per transition possession compared to just .82 points per possession half court situations. Hardaway is 18-of-20 from the floor when pushing the ball and scores at least 1 point on 79% of the transition possessions that he utilizes. To borrow from MGoBlog, cackle with knowing glee when you see Hardaway streaking down the floor with the ball in his hands after a defensive rebound.

Transition opportunities are generally created by live ball turnovers or clean defensive rebounds – either by a guard or from a great outlet pass. The Wolverines have struggled to create turnovers but have been very strong on the defensive glass, ranking fifth nationally in defensive rebounding percentage. Finding easy opportunities in transition will become increasingly difficult as play becomes more physical in Big Ten play but the combination of turning defensive rebounds into easy offense could be the most telling barometer for Michigan’s success in league play.