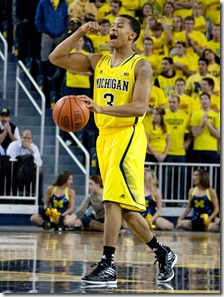 Trey Burke hates to lose. This is a fact that was obviously on display in Brooklyn, as he (along with Tim Hardaway Jr.) essentially willed Michigan to victory over West Virginia despite some defensive lapses from Michigan and timely 3-point shooting from the Mountaineers.

Trey Burke hates to lose so much that he scored 27 points, grabbed five rebounds, dished out eight assists and stole the ball three times just to keep Michigan’s perfect record. It was one of his best games in a Michigan uniform but when Burke was asked if he would call the performance his best, he hedged.

“I would say it was one of them. I would say there were a few games I could say were my best games, because it wasn’t all about just scoring. It was getting others involved, and that was how we opened the game up,” Burke said. “We were all unselfish, and I think that starts from the point guard spot. If your point guard getting guys the ball and doing his job, making guys better, your shot at winning increases.” (Photo: Dustin Johnston)

But it’s not just on the national stage where Burke hates losing; his will to win is evident even when he’s playing Michigan freshman Caris LeVert one-on-one after practice. Apparently, just before he met with media on Wednesday, Burke had lost to LeVert. Burke’s session with the media was getting in the way of a rematch with the Wolverine freshman.

“I hate losing. I think that’s something that this team has picked up from a lot of guys like me and Tim. We’re so competitive and things like that. I actually just lost to Caris one-on-one, so I’m trying to get back out there and play him right now,” Burke said. “I’m kind of mad about that. In practice, it’s just tough. When we lose, it could be small things. It could be pickup, it could be shuttle drills. We may lose to the maize team and me and Tim, we’ll get on our team about it.”

Burke takes every challenge, whether it’s a shuttle drill in practice or a nationally-televised game against a high-profile opponent, very seriously. Departed Michigan captain Zack Novak once said, definitively, that he hated losing more than he loved winning. All we know is that Burke hates losing, and for now this seems to be enough motivation for him to accomplish pretty much whatever he wants on the court.

The intensity that Burke brings to both practices and games may be great for Michigan’s win-loss record, but it certainly takes its toll on his body. The sophomore knows how crucial he is to Michigan’s success, and is taking care of his body much more diligently than he did last season.

“I get stretched by our strength coach right after the game, I have media and right after media I go get in the cold tub for about 8 to 10 minutes,” Burke said. “Then the next day we come in and we may have practice. It may be a light practice, so we’ll stretch before practice and after practice get in the cold tub. By that next day after the game, we’re pretty much back to normal.”

That cold tub he mentioned? Apparently, it’s no joke.

“It’s a shock every time I jump in there, still. I know when (the freshmen) first got in, that was on their minds every practice. It was on mine last year. After practice, I knew they would force me in there. You know, after about two or three weeks of getting in there, you’re adjusted to it but it’s still a shock every time you get in there. I’m used to it now.”

Michigan is willing to do whatever it needs to do to insure Burke stays healthy for the remainder of the season, even if it means dunking his entire body in a vat of ice water. And as long as he continues to put up stat lines like the one he hung on West Virginia, it will all be worth it.

Burke has been the engine driving the Wolverines all season, and that extends to practice. Burke has been a leader both through his competitiveness and the way he takes care of his body. Beilein said Burke is constantly talking in practice.

Burke also instructs the freshmen at times on the importance of maintaining their physical health throughout the grind of the season.

“You know, just getting in the cold tub, stretching after games, stretching after practices, and I think that gives us more fuel down the stretch,” Burke said. “That’s really the main thing I tell them to think about, just stretching and taking care of their bodies.”

Burke is able to be relentless in games and in practices because of how he has taken care of himself physically so far this season. Last year, Burke played more minutes and, fresh out of high school, wasn’t aware of the different tactics he could take to preserve his energy. The consequence was 6 for 26 shooting in his last two games as Michigan limped to the finish line with a pair of losses. This year, he expects a different story.

By the way: that one-on-one game Burke lost to LeVert? He got his rematch. Naturally, he won, 15-13.