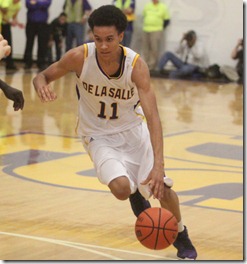 A.J. Turner is a 6-foot-7 guard at Warren De La Salle High School graduating in the class of 2014. De La Salle is currently 3-0 coming off of a double overtime win over Michigan State commitment Drake Harris and Grand Rapids Christian. Turner had 35 points in the win (video above) and has been drawing significant interest from Michigan’s coaching staff. Most recently, John Beilein attended his practice and we caught up with Turner to talk about his game, his recruitment and what he thinks of Michigan.

I’m a big guard. I can use my length to shoot over defenders. I have a really good jump shot and I can get to the rack pretty easily. I’m real long, and I think that helps me play defense, too.

We’re doing pretty good. We’re 3-0. We had a big win over Grand Rapids Christian on Friday.

What was it like going up against Drake Harris?

It was pretty fun. He’s a great player, I’ve got a lot of respect for him. It was a real fun game.

You scored 35 in that game, a 77-76 overtime victory. What did you like about your performance?

I didn’t try to force anything, I just let the game come to me. I went 15-of-20 from the free throw line, so I was in attack mode and got to the line and knocked down some free throws.

Find video of Turner’s 35 point performance and talk of a Michigan visit and potential offer after the jump.

Who has offered you?

What are some schools who haven’t offered yet but are showing significant interest?

It has to have a winning history. I like playing in front of big crowds, so that would be a big part of my decision, too.

You met John Beilein on Wednesday?

What did you think of coach Beilein?

At first, when he walked in, I was kind of surprised. But then when I started talking to him, he seemed pretty cool. He’s real down-to-earth. He’s a cool guy.

Did he talk to you about an offer?

Yeah, he said that he wants to build a relationship with me and my family. That’s why he wants me to come up for a visit as soon as I can. And he said that he and his staff are going to come out to three of my games in the future to evaluate me more and after that he’ll make a decision.

Are you familiar with anyone else on the staff?

Which schools are recruiting you the hardest right now?

Where is Michigan State in the picture?

I’ve only had a couple conversations with their assistant coach. I have never talked to coach Izzo. They talk to my dad, I think, more than they talk to me, so I’m not sure.

You go to school with Michigan quarterback commit Shane Morris?

Has he been in your ear about Michigan?

Yeah, he has. He talks a lot about it. He says I should go to Michigan, because he’ll be there, and he’s an extreme Michigan guy so he’s trying to get me to go there.

How much of an influence does that have on your decision?

I think it has a big influence. Me and Shane, we’re real close, we’re real good friends. That would be just another plus for me to go to Michigan.

When are you going to visit Michigan?

I’m not sure yet. I tried to come up for the Arkansas game, but I had the flu so I had to cancel at the last minute. As of right now, I’m not sure.

Planning any other visits?

I don’t have any set dates, but I’m working on going up to Northwestern real soon.