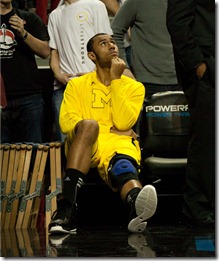 After improving his play at a steady rate this season and emerging as Michigan’s best one-on-one post defender, Jon Horford was sidelined once again after his left knee buckled during the Wolverines’ game against West Virginia on Saturday. (Photo: Dustin Johnston)

All that was known at the time was that Horford had injured the same knee he twisted earlier this season. On Wednesday, the Michigan coaching staff still didn’t know much else.

“I don’t think we have a definite time. He definitely won’t be playing in this game (against Eastern Michigan on Thursday), and who knows if he’ll be ready for the next game. There’s a very vague timeline.” Beilein said. “I don’t think we’ll know until the swelling is all down. In what we’ve seen so far, we’re very hopeful he can return.”

Horford is definitely out for tonight’s game against Eastern Michigan and potentially significantly longer. While it hurts to lose what Horford had been giving Michigan of late — stellar defense and offensive rebounding — the Wolverines have plenty of depth in the front court.

Max Bielfeldt, who was dealing with his own ankle injury a couple weeks ago, will be ready to play Thursday and will most likely spell Jordan Morgan and Mitch McGary.

“The plan right now is that Max, and Blake (McLimans) as well, could get minutes because he plays well against zone defenses in particular and he can do some really good things we may need,” Beilein said.

Jordan Morgan, who’s suffered from injuries himself, said that the key for Horford is remaining positive. According to Morgan, that shouldn’t be too difficult.

“He’s a really positive person, so he doesn’t really get down too much. You just give him words of encouragement. I’ve been there, a few times. You just give him words of encouragement to help him stay focused and stay in games,” Morgan said. “As we move on in this season, we’re going to need him more and more. He’ll just rest and give us what he can.”

Horford is walking around without the aid of crutches, and as of now Beilein said surgery has not been discussed as an option.

West Virginia is known for its physical brand of basketball, and Saturday was exhibit A. The Mountaineers rebounded their own misses at a below-average rate for them, but still managed to corral over 30 percent of available offensive rebounds.

However, Jordan Morgan was able to keep West Virginia from scoring too many points in the paint and answered the Mountaineers’ physicality with some of his own.

“He was physical. Their big player there, (Deniz) Kilicli, is as physical as we’ve seen. And he matched him ounce for ounce for every minute. There were a couple guys in there who I would only take to a buffet. Those guys are really strong guys,” Beilein said. “He really matched it. That really shows great growth over his time here. He’s always been pretty good at that. I thought they were maybe trying to get him to back down, but there was no back down in him.”

But it’s not only in his strong post play that Beilein has noticed improvement in his redshirt junior.

As we recently studied, Michigan has been running significantly more this season than in the past. There are a few reasons for this: more depth, athletic big men and guard rebounding, to name a few. One big reason Beilein mentioned, however, was Morgan’s improvement in his outlet passing game.

“It’s just right now our rebounding and outleting,” Beilein said. “There were times when Jordan Morgan, early in his career, was rebounding but still struggling to outlet. He outlets much better, and Trey Burke is getting the ball up the floor.”

After securing 10 rebounds in Michigan’s win over Binghamton, Mitch McGary was rendered largely ineffective against West Virginia. He clocked seven minutes fewer in playing time and tallied one rebound.

Part of the issue was the fact that McGary had a hard time staying out of foul trouble. John Beilein said the freshman is still learning how college games are usually called — and hinted at a difference between what’s called and what’s actually occurring on the court.

“The things that he’s doing, they’re not overly physical, it’s just the common way the game is called. And he has to learn about what they call and what’s actually happening. Because it was a very, very physical game,” Beilein said. “There’s a way to be physical without fouling, and there’s a way to foul without being physical. Mitch is still trying to learn those differences.”

Jordan Morgan, who’s had his own issues with fouling in his career, weighed in.

“You deal with fouls because you’re in bad position or you’re a step behind,” Morgan said. “We’ve got to keep him learning so that he sees things happening earlier and is able to stay out of those situations.”