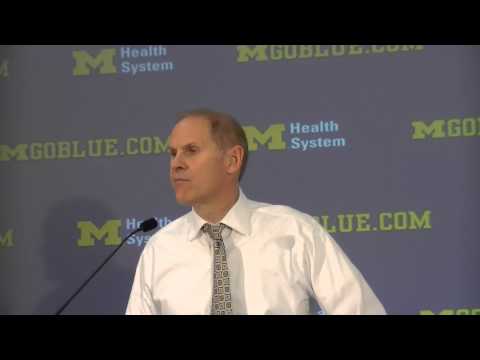 John Beilein spoke to assembled media on Thursday after his team’s 93-54 blowout of Eastern Michigan. You can watch the full press conference using the embedded media player below or read selected notes and quotes after the jump.


Opening statement: “I’m really pleased with the way we played today. With the preparation the last two days, we prepared just as we did playing West Virginia — a different style of defense for them, but I thought our focus was incredible, our kids had a strong desire to beat a team that’s right down the street. I knew we’d have to play well given the fact that they’d already beaten Purdue and had five other wins besides that. There’s a lot of distractions this time of the year. They’re going to go home on Saturday morning. Many of those freshmen have been here pretty much since way back on June 27th, when classes started. I’m really proud of my guys right now, the way they played with passion, with energy, because you have to in games like this.”