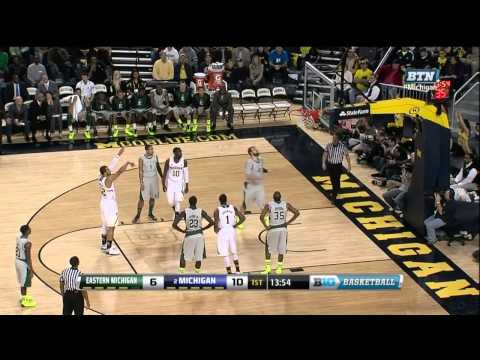 For the briefest of moments, it appeared Eastern Michigan was going to make Thursday night’s match-up with Michigan a challenge for the Wolverines. After this early run, Michigan made it clear that this would not be the case. Michigan looked tentative attacking the 2-3 zone on their first few offensive possessions, and found themselves down 6-2 as a result but the Wolverines turned it on in a stunning display of just how many ways they can attack a defense. After kicking things off with a rare hook shot from Jordan Morgan, all five Michigan starters contributed points to the run, illustrating exactly how dangerous the Wolverine offense can be. Glenn Robinson III nailed a smooth midrange jumper in the middle of the zone and finished strong inside; Trey Burke took matter into his own hands in finishing a layup with plenty of contact in the post; Tim Hardaway Jr. not only ran the floor on the fast break expertly, but contributed a 3-pointer and a great assist to Robinson. Nik Stauskas, of course, hit a transition 3. There just aren’t many weak spots in Michigan’s offensive attack — whether the opposing team is Eastern Michigan or NC State, the Wolverines have a tendency to overwhelm on that side of the ball.

2) Caris LeVert plays the best game of his career

This game was a sign of things to come for the freshman swingman. LeVert was all over the floor during each one of his 16 minutes, scoring eight points, grabbing two rebounds, handing out two assists and even notching a block near the end of the game. John Beilein thought LeVert was ready to contribute in a meaningful way to this team’s success, and the decision to burn his redshirt is looking smarter every game. LeVert scored his first points of the game — a two-handed slam — on one of the most ridiculous fast breaks in recent memory, a 5-on-0 testament to not hustling. The rest of his points came on two 3-pointers, but it wasn’t just his scoring that was so impressive. LeVert has a nose for the ball, evidenced by the offensive rebound off of the miss by Max Bielfeldt — LeVert timed his jump perfectly and snagged the ball after Eastern Michigan players jumped too early. He also has a knack for making the right play and taking care of the basketball. He didn’t have any turnovers, and twice he made the extra pass to find Nik Stauskas open for 3-pointers. Living up to John Beilein’s hopes for LeVert as a defensive stopper, he swatted a shot by his own man back in his face late in the game. With Trey Burke taking his fellow Ohio native under his wing this year, LeVert is only going to get better as the year progresses.

3) Mitch McGary makes his presence felt in the second half

After his shots didn’t fall in the first half, Mitch McGary found his groove in the second half. The talented freshman did what he does best: he attacked the rim, cleaned the glass, and went after the ball on defense. The result? McGary’s first double-double of his career, with 10 points and 11 rebounds (5 offensive). McGary can be a little streaky, but if he can put together a whole game of this kind of effort, he will be a force to be reckoned with. His instincts are excellent and are most evident on the defensive end, where he seems to always be in position to knock the ball away on an entry pass of get his hand on it when an opposing player is backing him down in the post. On one play in this sequence, McGary knocked away an entry pass straight to Trey Burke, who shoveled the ball to McGary at the other end for the finish; on two others, he got offensive rebounds and put backs.  There may come a day when John Beilein will feel comfortable dumping the ball to McGary in the post and letting him go one-on-one, but for now, it appears the Chesterton native is content finding his points in the flow of the offense. If McGary continues his upward trajectory this season, and as his confidence grows, he will be a very dangerous player in the Big Ten.

Michigan had some trouble attacking the 2-3 zone early in this game, but these two plays in the second half illustrate exactly how it’s done. In the first half, there were a few plays where Michigan tried to run this set but the timing was off between the baseline cutter and the player dumping the ball off at the free throw line. This resulted in shots that were more difficult than they needed to be, and a few blocks for Eastern Michigan. However, the Wolverines eventually got the timing down pat, and these two plays are examples of this specific set run to perfection. It doesn’t seem like one could ask for a better-suited player to run the baseline against a 2-3 than Glenn Robinson III — a quick, long, versatile player who finishes strong at the rim. What Michigan does in this set is have a player, usually a big, flash to the middle around the free throw line. The wing dumps the ball to him. From this position, the player with the ball has a few options. He can shoot the midrange jumper, drive it himself, or pass to the cutter running baseline. What both Mitch McGary and Max Bielfeldt do is use a shot fake to draw the second line of the defense toward them. When Robinson sees this, he cuts behind the defense and receives the dumpoff from the bigs. From there, all he has to do is finish. This play was run to perfection a few times, including McGary’s dunk in the previous video.

5) Nik Stauskas goes off from deep…again

The benefits of having a shooter like Nik Stauskas on the floor cannot be emphasized enough. When Eastern Michigan was packing in their 2-3 zone early in this game and not allowing Michigan to get anything in the post, Stauskas knocked down a couple 3-pointers and all of a sudden the zone opened up a bit. The freshman actually improved his already-torrid shooting percentage from long range, going 5-of-8 from beyond the arc on Thursday. It’s clear from these clips that Stauskas can make shots in nearly any situation — in transition, with a man in his face, spotted up in the corner, you name it. But to play zone against Stauskas? That’s a death wish. According to statistics from Synergy Sports, the freshman is scoring 1.5 points per possession used against zone defenses with a ridiculous 82% effective field goal percentage.

However, looking beyond the shooting, Stauskas shows a tendency for erratic play that is sure to place him squarely on the bench if it continues — plays like his attempted behind-the-back pass early in the game are not plays John Beilein has much patience for. He had two turnovers in this game, both unforced and unnecessary. Stauskas is more than a shooter, and has shown flashes of being an excellent passer. He just needs to curtail the flash and make smarter decisions with the ball when he gets into the lane.