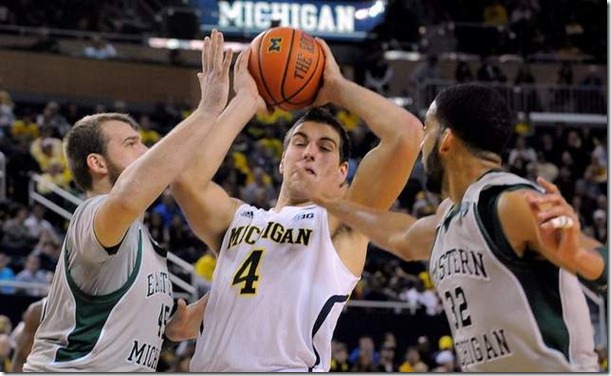 For two minutes, Eastern Michigan looked like a team that might be ready to catch Michigan in a pre-Holiday snooze Thursday evening at the Crisler Center. The Eagles jumped out to a 6-2 lead and Michigan showed just the slightest bit of hesitation against Rob Murphy’s Syracuse-style 2-3 zone. Then the Wolverines woke up, rattling off a 20-0 run over the next seven minutes of clock time, and put the game away before the second media timeout.

The Wolverines cruised to victory, 93-54, and moved to 12-0 on the season. Michigan’s offensive attack was steady, balanced and consistent as five different Wolverines reached double figures. Tim Hardaway Jr. led the way with 17 points and seven assists but Nik Stauskas’s five threes for 16 points and Trey Burke’s 11 point and eight assists were also impressive in support. Eleven Wolverines found the scoring column on the stat sheet and an impressive 26 of Michigan’s 35 field goals were assisted by nine different players.

Michigan’s offense showed no signs of rust after final exams as it cruised to a blistering 1.33 points per possession. Michigan’s shooting attack was equally accurate outside – 12-of-24 (50%) on threes – as inside – 23-of-45 (51%) on twos – of course threes are worth more than twos which yields a 59% effective field goal percentage. Michigan’s proficient shooting was combined with dominating and relentless offensive rebounding as the Wolverines grabbed just shy of half of their missed shots on the night. Michigan’s typical reliable ball handling was unfazed by Eastern Michigan’s trapping zone looks and the Wolverines offensive performance was its second best of the year.

The anemic Eastern Michigan offense was unable to play any better than it has over its last three games, failing to surpass the .8 point per possession mark for the fourth consecutive outing. Eastern struggled to shoot inside (42%) and out (27%) and Michigan was able to do a good enough job neutralizing Eastern Michigan’s offensive rebounding attack. The shots that the Eagles did make were generally contested and weren’t close to enough to make up for turnovers on one out of every four possessions. Strictly statistically speaking it was one of Michigan’s strongest defensive performances of the season but attempting to draw conclusions from that statistic is a fruitless effort.

Eastern Michigan was clearly outmatched in talent, discipline and effort while Michigan played with the sort of focus and intensity needed to blow open a blowout win. If one play stood out more than any other it was watching five Michigan players sprint down the floor past all five Eagle defenders for a five-on-zero fast break dunk by Caris LeVert. Michigan’s zone-offense looked well drilled and was extremely effective at getting the ball to the middle of the zone then throwing drop offs to cutters along the baseline.

Michigan’s schedule will provide its players with a bit of extended time off over the holidays. Players will be able to return home for four days to spend time with their families before heading back to campus to prepare for the Wolverines’ non-conference finale against Central Michigan on December 29th.