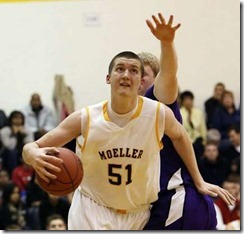 Mark Donnal had 21 points, 13 rebounds and two blocks in a 30 point win over Bryan. Donnal passed the 1,000 point mark for his career. Earlier in the week Donnal had 29 points and 12 rebounds in a win over Southview.

Find more after jump including notes on a pair of 2014 Wolverine targets who scored 40 or more points in a game last week.

Hamilton Southeastern was off over the last week and won’t play again until January 4th. However, Go Blue Wolverine posted footage from Irvin’s last game, a 33 point outing against North Central:

Booker’s Moss Point team lost to Davidson, 52-48, early last week and Booker had 31 points in the loss. Booker wasn’t slowed by a knee sprain which forced him to leave a game early the previous week.

Moss Point bounced back with a 15 point win over Brewbaker Tech. Booker exploded in the scoring column, netting 49 points against his AAU teammates Khalil Carter and Steve Rogers.

“He was really on fire,” Moss Point coach Micoe Cotton said. “He was shooting in to double teams. He had like 27 at halftime.”

Moss Point is now 5-8 on the season and Booker has been receiving recent interest from a big time suitor. According to Jason Jordan of USA Today, Duke has reached out to Booker recently.

Doyle is expected to be sidelined by a stress fracture for weeks and missed Bishop Verot’s most prevalent regular season event, the City of Palms Classic, last week. Dave Telep notes that college coaches likely won’t care that Doyle remains under the radar.

Edwards had 29 points and 13 rebounds in a six point win over Fairfield. Edwards had season lows over the weekend with seven points (1-of-10 from the field) and eight rebounds in a loss to Cincinnati Moeller. Michigan assistant coach Jeff Meyer was in attendance for Middletown’s game against Moeller.

Turner is one of the hottest new prospects on Michigan’s radar and is one to pay close attention to in coming days and weeks. De La Salle was idle over the last week but will head to Grand Rapids for a holiday tournament next week, opening against Greenville.

Allen’s Glenwood team lost to Lincoln, 41-39, and Allen had 21 points in the defeat.

Sumner had 19 points to lead Country Day in a 68-48 win over L’Anse Creuse North.

Wideman had 22 points and and 10 rebounds to snap a three game Lake Central losing streak with a 55-43 win over Portage.

Michigan watched Edwards, along with Tom Crean and a Purdue assistant, score 15 points and hand out four assists in a 59-48 loss to Broad Ripple on Saturday.

Kennard scored 25 points, grabbed 12 rebounds and handed out four assists in a 66-54 win over Brookville.

Boudreaux had 11 points and seven rebounds in a six point loss to Stevenson and was forced to miss time in the fourth quarter with a sprained ankle. The injury forced him to miss Lake Forest’s win over Libertyville later in the week.

Zimmerman had 13 points, 9 rebounds and 4 blocks in a 82-50 win over Narbonne. He added 24 points in an overtime victory over Morgan Park and 17 points and 8 rebounds in a win over Foothills Christian.

Zimmerman’s Bishop Gorman squad was defeated in the final of the Jerry Tarkanian Classic, losing to Mater Dei by a final score of 76-60. Zimmerman had just eight points in the loss. Here’s some footage of Zimmerman in action:

Fowler had a double double with 12 points and 12 blocks in a 55-36 win over Vince Edwards’s 10th ranked Middletown team.

Watson had 17 points as St. Joseph knocked off Brother Rice by a final score of 66-59.

Chesterton lost to Valparaiso, 55-48, and Holba had 13 points in the defeat.

Coleman scored a team high 19 points to lead Cathedral to a 68-58 win over Brebeuf.

He drained four 3-pointers in a row during a key stretch in the second quarter where he and Bluiett dueled back and forth. Then he missed his next six 3-pointers before drilling a 3 from the corner to give North Central the lead for good with just under four minutes to play. It wasn’t the most efficient game for Gordon, who was 9-for-21 from the field, but he wanted the ball in crunch time and wasn’t afraid to make plays. He finished with 26 points.