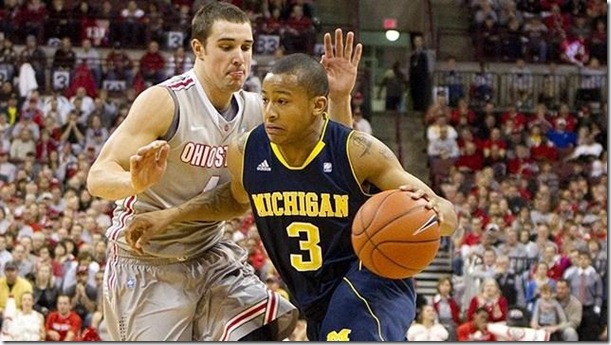 Throughout the season we’ll answer your questions that you submit via Twitter, e-mail or Facebook. This week we discuss a NCAA tournament bracketing, non-conference takeaways, class of 2014 recruits and much more.

@dsw_undefined: Which B1G personnel match-ups will be challenging for Michigan? (i.e. Burke vs Craft, etc.)

The Trey Burke vs. Aaron Craft match-up is fascinating because of how well Ohio State defended Burke last season. Burke was 12-of-36 with 16 turnovers in three games against the Buckeyes last season and he’ll be dying to prove that he can score the ball effectively against his hometown team. Burke got the best of the head-to-head match-up in Ann Arbor but struggled in the other two match-ups last season and a win in Columbus this year would be huge for Michigan’s floor general. The Buckeyes have a good approach to defending the pick-and-roll but Burke is more than capable of neutralizing Craft, who averaged under six points per game in the three head-to-head match-ups last season.

Defensively, that’s far from Michigan’s biggest concern – even in that individual game. DeShaun Thomas will be a load for Glenn Robinson III to handle all over the floor. Thomas is one of the best scorers in the nation and tough for anyone to defend but he’s likely to be Robinson’s toughest one-on-one match-up to date when Michigan heads to Columbus in a little over two weeks. Robinson has battled – with mixed results – against some taller more traditional power forward prospects but Thomas presents an entirely more difficult inside-outside match-up.

Michigan has more bodies to throw around in the post this season which should help defending back-to-the-basket scorers like Cody Zeller or Derrick Nix. Morgan’s experience should help against Zeller while McGary’s size will be invaluable against Nix. I still worry about more athletic frontlines, like Rodney Williams-Trevor Mbakwe combination, giving Michigan fits up front. Getting Jon Horford back healthy could be a huge boost to Michigan’s front line, especially in games against true scoring big men.

Indiana has the potential to overwhelm at any given position because of the sheer number of options that Tom Crean has available. It’s not that stopping one individual is a problem; it’s that you can stop four and the fifth will still kill you.

@20MC20: What record is needed in Big Ten play to have the opportunity to play in Auburn Hills in NCAA tournament?

Michigan has put itself in a good position to open the NCAA tournament at the Palace. Obviously it’s too early to make any definitive statements but considering that teams on the top five seed lines are generally given a geographic advantage, the Wolverines should be safe. I would say that if Michigan earns a 3-seed or better (perhaps even worse) it’s safe to start buying tickets at the Palace.

Last year’s Michigan team was a 4-seed, that many thought could have earned a 3-seed, at 24-9 (13-5 Big Ten). With 12 wins already in the bag, it would take a lot to knock Michigan down further than a 3 seed at this point but stranger things have happened.

The tougher break might be in terms of regional placement. This year’s regionals are in Washington D.C. (East), Arlington (South), Indianapolis (Midwest) and Los Angeles (West). Duke seems destined for D.C. while Indiana should be the front runner in the Midwestern region, staying home in Indianapolis. If Michigan ends up on the No. 1 seed line, a trip to Los Angeles could be a very real possibility if the Wolverines are below those two schools on the S-curve.

@zachvandenberg: What did you see from the team during the non-conference schedule that bodes well or ill for B1G play?

The first part is easy. Michigan’s rebounding in non-conference play absolutely bodes well for its success in the Big Ten. It was obvious that Michigan was going to be a very good team this year but the improvement in rebounding was not only something I had to see to believe, it was the element that could take the Wolverines from good to great. Thus far, Michigan passes that test. The Wolverines have been an elite defensive rebounding team, ranking 6th nationally, and an above average, 64th nationally, offensive rebounding team. John Beilein’s former teams have been either average-at-best (defensive rebounding) or awful (offensive rebounding) in both of these categories for the past 10 seasons. The improvement on this unit is blatantly obvious – both to the naked eye and on the stat sheet.

Rebounding in the Big Ten is a different challenge, of course. Last year’s Wolverine squad did a great job on the defensive glass in non-conference play before struggling in Big Ten games, ranking 9th among 12 league teams on the defensive glass. But given that Michigan has already played three great offensive rebounding teams in Pittsburgh, Kansas State and West Virginia, it’s safe to assume that this Michigan team is a legitimate threat on the boards against all comers.

As for a cause concern, I’d point to the defensive side of the ball. Michigan’s defense hasn’t been bad by any stretch but is clearly the weakest link. The Wolverines have shown vulnerability on that side of the ball as a number of opponents have gotten a number of open looks. The Wolverine defense is based on forcing difficult shots, not fouling and cleaning up the defensive glass. Michigan is avoiding fouls (1st nationally) and dominating the glass but opponents are getting just a few too many shots. Michigan doesn’t force many turnovers but will have to find ways to apply more pressure and tighten up the defense going forward. In Big Ten play, especially on the road, Michigan’s defense will be tested to a level that we haven’t seen in November or December

There haven’t been any direct updates about Horford’s status. He’s recovering from a dislocated knee cap, an injury similar to the one that sidelined him earlier this season. Beilein seemed fairly optimistic that Horford would return within a couple of weeks but wasn’t able to get more specific. Expect Horford back somewhere in Big Ten play but he might need a bit of time get back up to speed once again.

@Metoxo: If you HAD to pick, who will be the first 2014 recruit to commit?

Now that there are only two 2014 offers outstanding, this is a tricky question. I think Michigan has a better shot at Devin Booker than Trevon Bluiett, as things stand today. However, neither prospect appears to be close to making a decision. Recruiting can change very quickly – see Keita Bates-Diop to Ohio State – so you never know what can happen with so much time left in both recruitments.

I think it’s more likely that Michigan offers another prospect and they commit before either Booker or Bluiett. The top candidates for an offer right now are Vince Edwards and Ricky Doyle. Michigan is probably in the top two for Edwards with Purdue as the main competition — with Michigan being the school gaining momentum. Doyle has yet to take college visits but if Michigan is able to get him on campus, expect an offer and expect the Wolverines to be strong contenders. The catch here is that Doyle doesn’t want to take any visits until after his high school season. One x-factor prospect still in the evaluation stage? AJ Turner. Turner has emerged as one of the top 2014 prospects in the state of Michigan and John Beilein and his staff will focus on him over the coming weeks and look to host him on an unofficial visit shortly.

To answer you question directly, Edwards seems the most likely bet at this point in time.

@jlustig22: It’s been written that depth is UM’s biggest weakness but how important is depth in college basketball? Is having 6 key players enough?

Depth isn’t important until it is. Michigan has more than enough depth to win games consistently – now or in March. Sure, John Beilein doesn’t utilize his bench (Michigan ranks 325th in bench minutes played) as often as some others but there’s little correlation between bench minutes and success. Thad Matta’s great Ohio State teams have routinely utilized one of the shortest rotations in the country, and he was in the Final Four last season.

Michigan has four legitimate perimeter scorers, a pair of steady big men, and a rotation that John Beilein trusts. The real question is does Michigan have enough depth to sustain a major injury scare?

A major injury could derail Michigan’s season especially if it comes at a critical position. Trey Burke is obviously the most critical piece of the Wolverine rotation. The All-American plays perhaps the most important position on the floor and is the straw that stirs the drink in the Michigan offense. An injury to Glenn Robinson III could be the next most debilitating, as Michigan doesn’t have any other natural combo forwards on the roster.

To answer your question, if everyone stays healthy then Michigan has enough depth. If not, things could become dicey very quickly. That’s the case in Ann Arbor but good luck finding a national contender immune to that assessment.

@ProdSweats: which B1G roads games are must wins for the Wolverines?

First off, every road game is a massive challenge in the Big Ten.

Michigan’s league schedule is interesting because its road games against conference contenders are front loaded. Michigan will play Indiana, Ohio State, Michigan State and Illinois on the road before hosting the second leg.

The “should win” road games bookend the league schedule. Michigan’s first road game is at Northwestern and its final two are at Penn State and Purdue. The middle six come against teams with an average Ken Pomeroy rank of 14.5 and will be an absolute blood bath. Wins in any of those six games will serve as a major boost to Michigan’s hopes to repeat as Big Ten Champions.