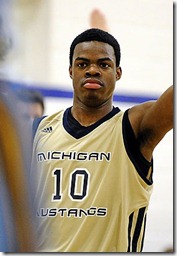 2013 Michigan signee Derrick Walton said his team learned a valuable lesson on Wednesday after getting blown out by 17 points to Detroit Southeastern, suffering their first loss of the season.

“(Tuesday) was a huge wake-up call. We were just (barely) beating guys. We were just sliding by,” he said after Friday’s win. “We were rebounding the ball poorly and it finally came back to bite us.”

Walton scored a game-high 32 points on Friday and was once again the best player on the floor, adding nine assists and eight rebounds, leading his team to the win and a 4-1 record.

Walton struggled in the early going as Hyde Park (9-5) used a 2-2-1 full-court press that bothered Chandler Park, forcing several turnovers. Walton’s team couldn’t find an offensive rhythm and found themselves down by as many as nine points in the first quarter.
After trailing 19-13 to start the second quarter, Walton figured out the Hyde Park press, seamlessly splitting double teams and finding open teammates for open baskets.
Chandler Park went on a 14-3 run to start the second quarter, and opened up a five-point lead. After allowing the game to come to him, Walton put the ball on the floor and created his own offense, showing the ability to finish in traffic and score with his off-hand.

With 2:18 remaining in the first half, Walton went down with a twisted ankle after stepping on another player’s foot on defense. After Chandler Park called a timeout, Walton shook off the injury, returned to the game and went on to play all 32 minutes.

With Chandler Park trailing 40-38 at the half, it was Walton’s time to take over.

He scored 13 points and added three rebounds, two steals and two assists in the third quarter, giving his team a one-point lead going into the fourth.

Walton started commanding more attention from the Hyde Park defense, and midway through the fourth quarter, led his team on a run that would eventually ice the game. After trailing by two points with just over five minutes remaining, Walton turned up the defensive tenacity, and got a steal that led to a fast-break basket and a tie game.

Chandler Park wouldn’t look back from there as they outscored Hyde Park 18-10 in the fourth quarter and earned the nine-point win.

Walton, who also went 11-for-13 from the free-throw line, said this win was especially gratifying, considering the way his team performed in its loss on Wednesday.

“It’s good to come back off a loss, and get a W,” he said. “It was kind of downhill. We had our heads on that loss, so it was great to come back and get a win.”

Walton said that Chandler Park’s coach, his father Derrick Sr. had a message for his team the day after their first loss of the season. He said his coach wanted him to focus harder on rebounding and conditioning.

Walton Jr. took his father’s words to heart playing hard on both ends of the floor for 32 minutes, and turning in his best rebounding performance of the season.

As for his team’s season?

Walton said he is still picking his team to be in contention for a State Title in March.

“The main goal is to hold up that trophy at the end of the year,” he said.