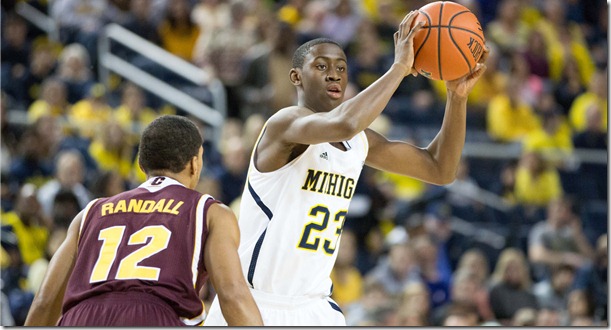 Michigan’s offense showed no signs of holiday rust despite a nine day layoff, paving the way past Central Michigan to wrap up a perfect 13-0 non-conference record. The Wolverines pulled away early, extending their lead to as many as 19 points in the first half, but a lackluster defensive effort kept the margin relatively close in a 88-73 Michigan win.

Michigan’s number two scorer, Tim Hardaway Jr., was sidelined by an ankle injury but the Wolverines had plenty of reserve firepower as Trey Burke, Nik Stauskas and Glenn Robinson III combined to score 61 points. Burke led the way with 22 points and a career-high 11 assists (to just one turnover). Robinson and Stauskas were most effective doing what they do best: cutting to the basket (Robinson was 8-of-10 on twos) and shooting threes (Stauskas hit five triples).

The 2012-13 Wolverines continue to make what would have once been “season-best” level performances look routine. Michigan scored 1.31 points per offensive possession, a better per possession output than any game last season, despite the absence of its No. 2 scorer. Michigan turned the ball over just three times in 67 possessions and shot the ball extremely well, connecting on 62% of its twos and 38% on threes. The Wolverines’ 4.5% turnover rate and 60% effective field goal percentage rendered the other two factors peripheral at best, excusing a sub-par offensive rebounding day and the lack of free throw attempts.

Scoring points at an outlandish rate is a nice luxury but it also masks a few blemishes. This was a poor defensive showing from the Wolverines and, given the competition, perhaps the worst of the season. Central Michigan scored 1.09 points per possession, its third best offensive output of the season to date, and was effective attacking the basket. The Chippewas entered the game shooting just 44% on twos but carved up Michigan’s interior defense – in the half court sets, in transition and on the offensive glass – en route to 59% two-point shooting. Effective inside scoring combined with average (32%) three point shooting yielded a 54% effective field goal percentage. The Wolverines avoided fouling, as they’ve done all year, but simply couldn’t force many misses.

While the defensive effort as a whole was lackluster, statistically this was Michigan’s worst defensive rebounding performance of the season. Central Michigan rebounded 36 percent of its misses on the night and was able to turn 11 offensive rebounds into 14 second chance points. The Wolverines’ most significant undoing can be at least partially explained by the absence of its most consistent defensive rebounder: Tim Hardaway Jr.  Hardaway’s transformation on the defensive glass has been a major storyline this season and was especially apparent as an average-at-best offensive rebounding team got the best of Michigan on the glass.

While it’s nearly impossible to complain about a 13-0 start (only four of 347 Division I teams remain unbeaten), Michigan’s defense has left some causes for concern in recent weeks. The Wolverines aren’t going to be able to shred Big Ten defenses nearly as easily as they have in non-conference play and could be in for a wake up call if they are unable to tighten up their defense. That challenge will begin in Evanston on Thursday as the Wolverines open the conference season against a Northwestern team trying to find its way without injured senior guard Drew Crawford.