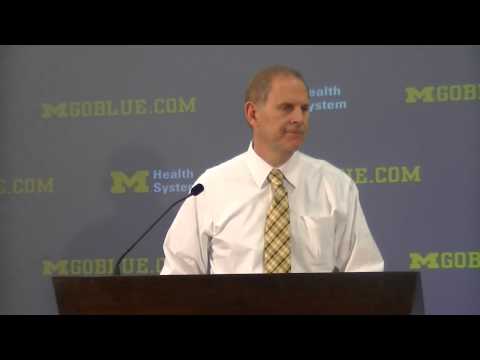 John Beilein spoke with assembled media after Michigan’s 88-73 victory over Central Michigan Saturday night. Regarding Tim Hardaway Jr.’s injury, the coach did not say whether or not Hardaway will be ready to play against Northwestern and would not define the nature of the injury other than saying it was an “ankle injury.” You can watch the full press conference using the embedded media player below or read selected notes and quotes after the jump.


Opening statement: “At the end of the game I think it dawned on me that we won a game without Tim Hardaway in the lineup at all. I think the good news was that we scored 88 points, but the bad news was that we gave up 44 in the second half. I think we really missed his presence at that time. At the same time, you can look at a couple really outstanding numbers. Our assist-to-turnover (ratio), Caris LeVert being thrown in there. I mean, a month ago he was a redshirt and now he’s in the starting lineup. I loved the way he performed. We have challenges with Central Michigan because of the speed with which they run their break. Probably as good as anybody’s run it, the fast break after a basket like Arkansas and people like that, North Carolina State. Very similar, very difficult to catch up with. Really love the way we defended pretty much in the half-court situation. They have some kids … that are both really good shooters from the outside. They run great sets for them and we defended very well. It’s a win, it’s 13-0 in non-conference — we’ll take that every year we can get it. I think it was a challenging non-conference schedule, and now it’s on to the Big Ten.”