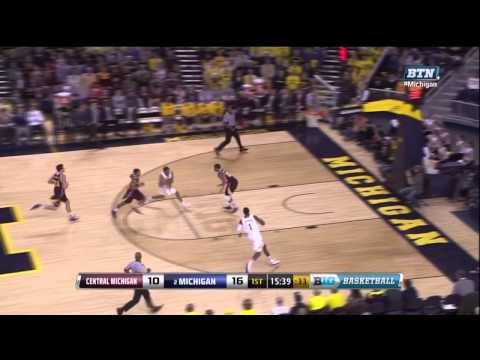 1) Trey Burke opens the game on a tear

It’s getting a little tiring writing about all the ways in which Trey Burke has excelled this year, but judging by how the point guard has played of late, we might as well just get used to it. Burke was spectacular again against Central Michigan, and again he jump-started the Michigan offense early. After struggling from beyond the arc against Eastern Michigan, Burke lit it up from deep on Saturday, making four of his seven attempts. If a defender feels the need to pressure Burke behind the 3-point line, it is virtually impossible to defend him because of his quickness off the bounce. Burke established the deep ball early, knocking one down for the game’s first points. Later, he receives an excellent pass from Caris LeVert, who sees Burke open in the corner, and Burke knocks it down. One thing that stood out on the 2-on-1 fast break layup was Burke’s use of the “Euro step.” I could be mistaken, but that was one of the first times I’ve seen the guard break out that move made especially famous by James Harden of the Houston Rockets. The move is really two-and-a-half steps in disguise, but it is an excellent tool for a player who slashes to the rim as much as Burke does. Also showcased in this sequence is Burke’s consistently nasty crossover. It’s difficult to argue that any player is having a definitively better season than Burke at this point. Michael Carter-Williams is the only point guard approaching Burke statistically, and even then Burke appears to come out ahead. Carter-Williams has the mind-blowing assist rate of 51 percent, but at nearly the same usage Burke’s offensive rating is nearly 25 points higher. The difference in offensive efficiency shouldn’t be surprising given that Burke turns the ball over less and shoots the ball better (inside and out) than Carter-Williams by a fairly wide margin.

No Michigan player in recent memory makes the game look as easy as Glenn Robinson III does. He seems to always be in the right spot offensively to take advantage of whatever opportunities the defense gives him, and his teammates are smart enough to get him the ball when said opportunities arise. Robinson begins the first play at the top of the key and gets a back screen from Jordan Morgan. Morgan’s defender falls asleep on the play and lets Robinson cut freely to the basket — from there, it’s an easy play for Burke to get Robinson the ball and for the freshman to finish with a two-handed slam. For the next two plays, Robinson gets his points by the method he’s used all season: running the baseline and slipping behind the defense upon guard penetration. First, Robinson takes advantage of Trey Burke’s smart decision to push the ball against the Chippewas. Once Burke penetrates, Robinson is on the baseline behind the defense, perfectly positioned to receive the drop off and finish with authority. Next, against the zone defense Caris LeVert is the one who draws attention — he lobs the ball to Robinson, who’s running the same action as before. This time, Robinson finishes the reverse layup through contact. Robinson was a key cog in the Wolverines’ offensive attack on Saturday, scoring 20 points on 9-of-13 shooting with most of the baskets looking eerily similar to these plays.

3) Caris LeVert creates his own offense

LeVert has improved steadily with every game in which he receives significant playing time, and Saturday certainly continued that trend. With Tim Hardaway Jr. out with an ankle injury, LeVert was given the start in his place and the freshman stepped up to the plate in a big way: LeVert notched nine points, five assists and two rebounds and looked quite comfortable within the offense. This sequence shows a few plays in which LeVert asserted himself and looked for his own shot with success. It’s clear that what we’ve been hearing out of practice since the fall is true: LeVert can score in a variety of ways, often unexpectedly. This speaks to his versatility — the Pickerington native can handle the ball, pass, shoot and defend. The first play in this sequence shows that LeVert has no trouble pulling up and hitting a long two with a hand in his face. The second clip shows the tail end of an exceptionally long possession that saw Glenn Robinson III grab two offensive rebounds. With Michigan’s offense stalling out, LeVert shows off his handle in taking matters into his own hands. He crosses over his shorter defender and nails a contested shot at the free throw line. The third play illustrates LeVert’s ability to score in transition; with the defense in flux and out of position, the freshman spins his way to the hoop and finishes at the rim in traffic. It’s clear that LeVert is merely scratching the surface of his ability, and he is further proving the decision to burn his redshirt was a smart one.

We would be remiss if we didn’t include one of the more ridiculous 3-point shooting performances in recent memory from — guess who – Nik Stauskas. After not making a 3 in the first half, Stauskas turned it on in a big way in the second half. Starting at the 18:26 mark in the second frame and ending with his make with 9:09 to go, the freshman hit five straight 3-pointers en route to a 19-point, seven-rebound performance. As Dylan mentioned this stat in the recap, but it’s worth repeating: Michigan had a player make five 3-pointers in a game three times last season; Stauskas has already accomplished this twice in consecutive games — and we’re not even into Big Ten play. Stauskas makes hitting five deep balls in a row seem pedestrian, but it’s not. The key for Stauskas is his insanely quick release and his long arms that allow him to get his shot off over defenders closing out. Performances like the one against Central Michigan keep driving up Stauskas’s already-astronomical effective field goal percentage — it’s now at 68 percent.

An easy critique of Michigan’s post play on Saturday was the need for more consistent play from both featured big men: Mitch McGary and Jordan Morgan. Morgan struggled early in his career with finishing around the rim, and while he has made great strides in this area and is now a relatively consistent finisher, every once in a while those old problems rear their ugly heads. Against Central Michigan, Morgan showed just how far he has come — and where he has come from. The redshirt junior displayed a mature post game with an impressive spin move and baby hook in the lane. But then, on a seemingly easy reverse finish off the feed from Nik Stauskas  (who got cheated out of two assists in this particular sequence), Morgan can’t hit the lay-in. These kinds of shots have to be money in the bank if Michigan is going to have consistent production from its big men. McGary seemed a bit sluggish when he was in the game. Though he had two blocks and four rebounds, the freshman only had five points and missed out an a few opportunities to score around the basket. McGary gets a Glenn Robinson-esque bucket on the first play of this sequence, slipping behind the defense, receiving the dump-off from Eso Akunne and finishing strong with the dunk. However, when he tries to do essentially the same thing off a pick, he muffs the dunk attempt and gets hung. Again, Michigan is very good at getting easy opportunities for its bigs — these plays have to be nearly automatic.