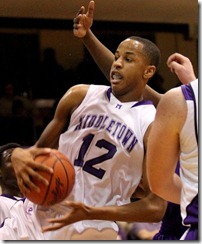 Vince Edwards, a versatile wing prospect out of Middletown, Ohio, shot up Michigan recruiting boards after two of the Wolverines’ top combo forward targets committed elsewhere. The Wolverines have been in on the 6-foot-7 combo player throughout the summer but mutual interest continues to rise steadily. An offer is awaiting Edwards when he visits Ann Arbor and he finally appears to have found a date to make the trip. We caught up with Edwards to talk about when his visit will be, what he thinks of Michigan and more.

How has your high school season gone so far?

“It’s getting a lot better now, actually. We’re starting to turn our season around. We have one of the toughest schedules in Ohio. We started off slow. We had games that we should have won but we let them go. But now, we’re starting to gel together more as a team and we’re doing a whole lot better. We’re on a 3-game win streak right now.”

How has the season gone for you personally?

“It’s going pretty well. Before we went down to Florida, I didn’t have that good of a game against (Cincinnati) Moeller, of course, so I knew I had to bounce back for my team and my teammates in order for us to come down here and win. I did pretty well all three games, and we ended up winning the championship.”

(Edwards’ Middletown team won the Rock Holiday Classic at Broward Prep in Florida and Edwards was named the MVP.)

Who are the schools recruiting you the hardest right now?

“Definitely Purdue and Michigan are my top two. They are recruiting me the hardest.”

What sort of contact have you had with the Michigan coaches recently?

“Daily basis contact. Coach Bacari (Alexander) is always texting me, and then coach Beilein will shoot me a text. I’ve got a good connection with them. Coach Beilein’s always saying hi. They’re a real cool coaching staff. They crack jokes, they get along with you really well. They just like to have fun.”

What do you think of the way Michigan has played this year?

“My God, they’ve been playing really well. They really develop their players. Everybody on the floor for Michigan is very versatile. They shoot the ball, stretch out the floor for big guys on the inside.”

Do you see yourself fitting into what they do?

“I feel like it fits perfectly. I’m versatile, I can accomplish a lot of things for teams. Also I can shoot it when I’m spotted up. That’s what coach Beilein says he loves about me, that I’m a very unselfish player.”

Has John Beilein talked with you about an offer?

“Yeah coach Beilein has talked about an offer. He just told me that any time when I come and visit, he’s going to offer me then. He said if I like Michigan, then I’m their first choice. And if I don’t, thanks for the time.”

How are you weighing the pros and cons of Michigan and Purdue?

“It’s pretty equal in how the coaching staffs are in their treatment, you know? Both schools have really shown a lot of interest for me. Coach Beilein was saying that he knows Purdue very well, and they recruit the same type of guy that he does, that coach Painter does.”

Do you have a visit date for Michigan?