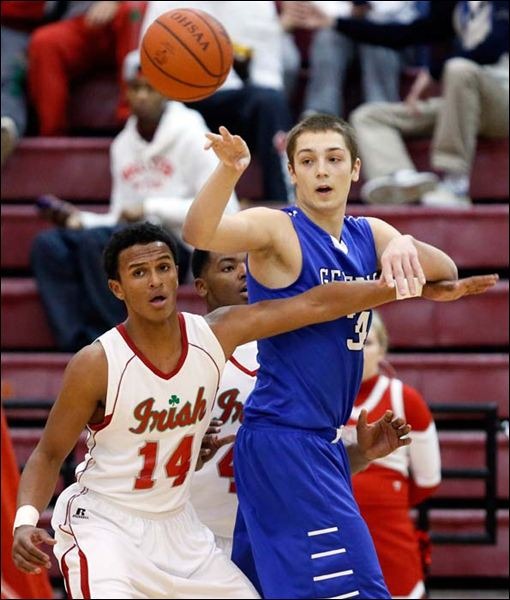 Our weekly look at how Michigan recruiting commitments and targets fared across the country including statistics, videos and photos. We’ve also refreshed our Class of 2014 Recruiting Board.

After the jump, we track Beilein to scout a number of in-state prospects and 2015 target Luke Kennard ties a future Hall of Famer with a scoring record at the Beach Ball Classic.

Anthony Wayne lost its first game of the year, 56-42 to unbeaten Toledo Central Catholic. Donnal had a game high 15 points, all after halftime. The Michigan bound big man struggled with foul trouble, drawing his first foul in the opening minute, taking a seat on the bench, and then drawing his second foul with just 1:21 left in the first quarter.

Hamilton Southeastern was idle over the last week.

Booker had 36 points in a nine point loss to Poplar Bluff and added 30 points in a four point win over Memphis Kirby on Friday. Booker had 25 points as Moss Point fell, 50-38, in the fifth place game of the Poplar Bluff Showdown. PowerMizzou.com was in attendance and posted lengthy scouting videos of Booker in action at the tournament.

Bluiett was pivotal in helping Park Tudor avoid an upset loss to Lapel, as his team prevailed 46-43.

The 2014 Mr. Basketball candidate is being recruited by Indiana, Purdue, Butler, Michigan, Kentucky, Florida and Louisville, and he showed why late in this one. Bluiett scored all six of Park Tudor’s fourth-quarter points — giving them leads of 42-40 and 44-43 before making a pair of free throws with 22 seconds left and allowing his team to escape with the win.

Edwards discussed his upcoming plans to visit Michigan in the next week with Joe Stapleton.

John Beilein was in attendance watching AJ Turner and De La Salle beat Lowell in Grand Rapids on Thursday. Turner had seven points and six assists in the 60-51 victory.

After a lackluster perofrmance in front of Beilein, Turner bounced back in a big way on Friday with 19 points, nine assists, seven rebounds, four blocks and three steals in a 49-36 win over Grand Rapids CC, taking home MVP honors.

Sumner was in attendance for Michigan’s win over Central Michigan on Thursday. He had a game high 20 points in a 80-51 win over Bowling Green. Country Day coach Kurt Keener raved about his quickness:

“Edmond is such a jet; I don’t know if there’s a quicker player in the state or the county,” Keener said. “The more we can have the ball in his hands, and get him rushing up and down the court, the more effective we are and the more opportunities we have.”

Here are highlights of Sumner in action against Bowling Green.

Allen faced a box-and-one against Collinsville, scoring just 10 points and injuring his ankle in the third quarter on Friday. He sat out Glenwood’s games later in the weekend due to the ankle injury.

Doyle remained sidelined with a stress fracture in his foot.

Chatman remained sidelined with a transfer eligibility issue and isn’t expected back until March 16th, 2013.

Lake Central was idle over the holidays.

Kennard stuffed the stat sheet at the Beach Ball Classic in Myrtle Beach over the weekend. He opened the tournament with 22 points (on 9-of-26 shooting) and 12 rebounds in a loss to Bishop Gorman (NV) and fellow U-M target Stephen Zimmerman. In consolation play, Kennard bounced back with a strong 33 point (12-23 fg), 14 rebound performance in a win over host school Myrtle Beach.

But Kennard saved his top performance for last, scoring scoring 43 points on 13-of-24 (5-7 3pt) shooting in an 86-77 loss to Orem (UT). Kennard’s 43 points were tied for the single game tournament scoring record with none other than Kobe Bryant.

Michigan coaches were watching Edwards recently and he updated his recruitment with the Indy Star. Wolverine freshman Glenn Robinson III is taking center stage in Edwards’s recruitment as a fellow product of The Region.

Edwards had 17 points and five assists in a 97-56 loss to North Central. Edwards was more impressive in a win over Castle, scoring 32 points (12 in the fourth quarter) in the five point win.

Stone was at Illinois’ game against Auburn. Stone had 17 points in a 50-47 loss to L a Crosse Aquinas.

Sedrick Barefield
Barefield helped Corona Centenial to the Oaks Christian Holiday Hardwood Championship over the holidays. Barefield was named to the all-tournament team and scored 23 points in the championship game. Here’s a video interview with Scout.com featuring an update on Barefield’s recruitment and highlights of his performance:

Moeller beat Golden Gate, 66-46, lost to Wilbraham Monson Academy (47-42) and beat Waterloo Academy (53-35) in a holiday tournament in Florida. Fowler had 10 points and 12 rebounds in the win over Golden Gate. He added six points against W&M and eight points and seven rebounds against Waterloo.

Ash had 13 points including three 3-pointers in the loss to Bogan. He also led the team with 11 points and four assists in a 49 point win over Manley. Ash discussed his game and recruitment with IlliniBoard.com after the game:

Coleman unofficially visited Louisville for the Kentucky game and his Cathedral team beat Jay County (53-47) before falling to Indianapolis Tech (60-54).

Gordon had 23 points and six rebounds in a 97-56 win over East Chicago Central. Gordon had nine points in a 78-71 win over Fishers the night before.

Bacari Alexander was in attendance watching Jackson on Sunday evening as he scored 14 points and handed out five assists in a win over Chicago Hyde Park.