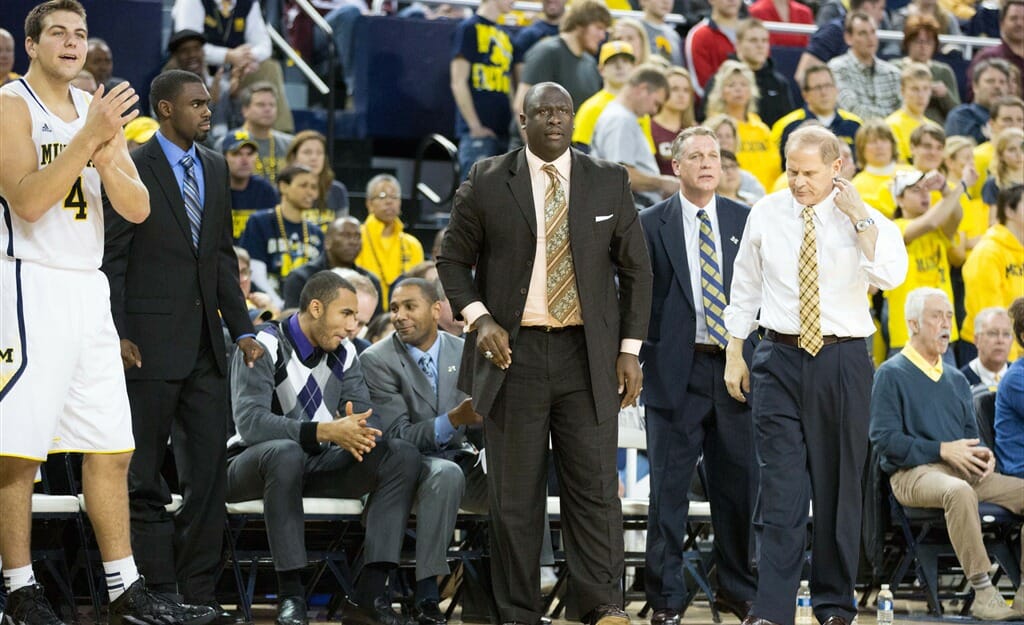 John Beilein did not reveal the exact extent of Tim Hardaway Jr.’s ankle injury when meeting with the media on Wednesday, but he did say the junior wing was questionable for Michigan’s game against Northwestern on Thursday.

“He did a few things yesterday, he’s gonna do a few more things tomorrow, and we’ll figure out what he can do,” Beilein said. “We really won’t know more until he stretched himself a little bit more in practice.”

Before his injury, Hardaway was having his best statistical season, averaging nearly 16 points and five rebounds per game. In fact, Hardaway holds the best defensive rebounding percentage on the team outside of Mitch McGary.

Hardaway has been doing it all for the Wolverines, even dishing out more assists than usual, with seven against Eastern — the last game he played in. But as of now, resting him may be necessary for preserving him for the remainder of the season and preventing the injury from lingering.

“One thing we know is that it needs just enough rest to be healthy the rest of the year or be lingering,” Beilein said.

Beilein also mentioned that while Hardaway has been doing exercises and some drills with Michigan’s strength and conditioning staff, he has not yet participated in a full practice. He has said in the past that if a player doesn’t participate in practice the day before, he most likely will not play in the ensuing game.

“Jon (Sanderson, Michigan’s strength coach) was working with some different things and Tim said he felt good, but it wasn’t a basketball practice yet,” Beilein said.

While Northwestern is not considered a Big Ten power, the Wildcats are are considered by opposing players to be one of the toughest teams to scout in the conference.

This is due to the fact that they run a variation of the Princeton offense. While the scheme is known for its backdoor cuts and slow-down style, it really only works when all five players have the ability to hit shots from deep. Unfortunately for Northwestern, the Wildcats will be without their second-best 3-point shooter, Reggie Hearn. Hearn was shooting almost 43 percent from deep, but he will miss Thursday’s game along with Drew Crawford, who is out for the season after playing in the first 10 games.

Even without a big chunk of their offensive production, the Princeton scheme will still provide a challenge, especially for the younger Wolverines.

“We’ll have six guys out there, if you count Max, who have never played against it. We have some experienced seniors who are fairly good at it, but not with the speed that Northwestern runs it,” Beilein said. “Until we get into it, I think Trey Burke said it the other day, ‘The speed that they run it, guys, is incredible’ – he was trying to talk to the freshmen – ‘You have to really be on this.'”

Eso Akunne, longtime Michigan scout team player, said the challenge Northwestern presents is twofold — not only is it tough to play them, it’s tough to prepare for them in practice because replicating their offense is so difficult.

“Their offense is great with all the cuts they do and the way all their players can shoot. It’s tough to scout for. It’s tough not only for the players, but it’s even tough to just mirror,” Akunne said. “That’s what we’ve been trying to do that past couple days is just mirror them perfectly. We know that even though we’re doing a good job, it’s going to be faster in the game.”

Nik Stauskas is the best shooter in the country, knows it

When you’re shooting 57 percent from beyond the arc on the season — the best percentage in the country — you can afford to be a bit cocky. After all, you’ve already walked the walk.

Nik Stauskas, Michigan’s dead-eye long-range bomber, has all the skills of an elite shooter — and all the confidence, too.

“Normally, I like to shoot around 60 (percent) from 3, because my last two years of high school, it was in and around that area,” Stauskas said. “I’ll take whatever I have right now.”

Stauskas said that while he cares chiefly about winning games, possessing the best 3-point shooting percentage in the country (among those with over 35 attempts) is something he takes pride in given the work he’s put into his shooting ability.

When asked if he thought he was the best shooter in the nation, he was frank.

If Stauskas continues to shoot at his current rate, the answer to that question will turn to simple fact. If there’s one person who thinks he can do it, it’s Stauskas himself.