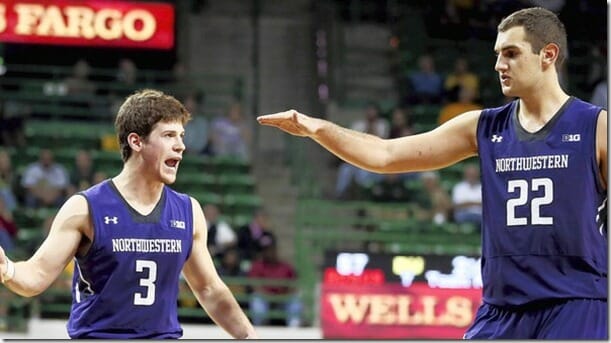 Michigan enters Big Ten play as one of four undefeated teams remaining in Division I basketball. The Wolverines breezed through non-conference play, winning games by an average of 21 points, but navigating the best conference in the country will be a much taller task. With six teams in Ken Pomeroy’s top 20 and four more in the top-100, the league appears to possess more talent than any season in recent history. The Wolverines journey to repeat as (shared) Big Ten Champions will begin tonight in Evanston. And while any coach in the league will tell you that, whether they come at Bryce Jordan or Assembly Hall, league road wins are golden, the Wolverines opener should be one of their easier road ventures of the 18-game season.

Northwestern has never made the NCAA tournament but John Beilein’s team shouldn’t be one to take playing the Wildcats lightly. The Wolverines won both contests against Northwestern last season but both games were decided in overtime. Of course, this Michigan team isn’t last year’s (they’re better) and just one Wildcat starter from last year’s Northwestern team will see the floor on Thursday evening. If the Wolverines are the team that they appear to be – and most expect them to be – then this is as close to a routine road win as they’ll see until late February.

Northwestern’s performance this season has been tough to decipher. The Wildcats followed consecutive home losses to Maryland (by 20) and Illinois Chicago with a major road win at Baylor. Then turned around and lost at home to Butler and Stanford. Save for the Stanford loss, the Wildcats had the services of their two leading scorers, Drew Crawford and Reggie Hearn, in those games. Entering league play, Northwestern head coach Bill Carmody will be without those luxuries as Crawford underwent season ending shoulder surgery and Hearn will miss tonight’s game with an ankle injury.

Point guard Dave Sobolewski (left) is the only double-digit scorer remaining in the lineup while Louisville transfer, combo-forward Jared Swopshire comes closest at nine points and six rebounds per game. 7-foot, 275 pound big man Alex Olah (right) has started every game down low, providing strong defensive rebounding and shot blocking but just average scoring ability (47% on twos, 42% on free throws). To his credit, and as is required by the Princeton-offense, Olah is a great passer with an assist rate of 26.2% equaling starting point guard Dave Sobolewski.

Look for Crawford and Hearn to be replaced in the starting lineup by freshman Kale Abrahamson and sharpshooting senior Alex Marcotullio. Abrahamson was a top-150 recruit while Marcotulio, a Michigan native, has played a supporting role throughout his four year career. Both players have attempted more threes than twos this season and are long range shooting threats first and foremost. Tre Demps and Mike Turner will provide the bulk of the minutes off of the bench. Demps backs up the point guard position while Turner is a 6-foot-8 freshman that has struggled to find his scoring touch and is just 8-of-29 on twos this season.

Statistically, the Northwestern offense fits the same profile as you would expect from past Wildcat teams. A slow-paced offense low on turnovers (17.5% turnover rate, 34th nationally), heavy on three point attempts (40.2% 3PA/FGA, 41st nationally) and lacking in offensive rebounding (29.7% OR Rate, 246th nationally). A remarkable 74% of Northwestern’s made field goals are assisted, that’s five percentage points higher than any other Division I team. Every Northwestern player on the floor is capable of shooting the three and isn’t scared to let it fly. Sobolewski leads the way, connecting on 48% of his long range efforts, but even Northwestern’s bigs have each knocked down 3-of-6 triples.

The Wildcats are ranked slightly higher in adjusted defensive efficiency than past Carmody teams but that’s before Big Ten play where they were absolutely shredded to the tune of to the tune of 1.11 points per possession in league games. Northwestern is pretty good at defending twos without fouling but doesn’t force many turnovers despite its 1-3-1 zone. The season numbers say the Wildcats are a pretty good defensive rebounding team but in actuality the defensive backboard has been their undoing. Stanford, Maryland and Butler – three good to great offensive rebounding teams – rebounded over 40 percent of their misses and averaged over 14 second chance points. Michigan’s big men have shown the capability to exploit weak defensive rebounding teams and will be called upon to make an impact against an underwhelming Wildcat frontcourt.

Northwestern already had to replace John Shurna, Davide Curletti, Luka Mirkovic and suspended JerShonn Cobb from last year’s roster before the season even started. Add in the losses of Crawford and Hearn you are left with a significantly depleted Wildcat squad. There are still plenty of causes for concern for John Beilein and his staff. First off, Michigan’s defensive rebounding was noticeably lacking without Tim Hardaway Jr. in its last outing. Hardaway remains questionable for Michigan’s conference opener. It will also be the first Big Ten road game for Michigan’s freshmen – all five of whom are likely to play significant minutes – who will be faced with a difficult defensive assignment against the complicated Wildcat offense.

Ken Pomeroy likes Michigan by a comfortable 8 point margin, 67-59, giving the Wolverines a 78% chance at opening league play on the right note. While Pomeroy’s projections don’t account for injury concerns, Vegas odds do and the casinos are even more bullish, pitting the Wolverines as 10.5 point road favorites. Nothing comes easy on the road in the Big Ten (road teams are just 1-3 thus far) and Michigan could be without the services of its second best player, but this is still a game that the Wolverines should be expected to win as legitimate Big Ten contenders.