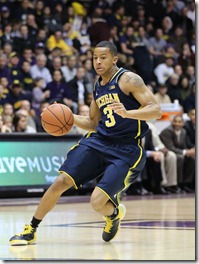 Michigan’s 94-66 win over Northwestern more closely resembled an early exhibition game than its first Big Ten road game. The Wolverines leaned on their All-American point guard early on and he ruthlessly put the Wildcats out of their misery as he hit his first four shots to start the game on a 16-4 run. Michigan would go on to score 51 points in the first half, two more than it scored in 40 minutes in the same building last year, and never looked back while coasting to an easy victory.