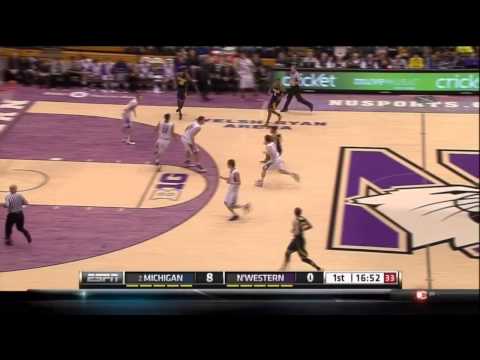 Whether you were a Northwestern fan or a Michigan fan at Thursday’s game (and there were plenty of both), it was a privilege to watch Trey Burke play. The point guard was utterly dominant. He was in complete control of the game at all times, but at no point was it more evident than in the game’s first five minutes, when he went on a 13-point tear that effectively put the game away. In his personal 13-point run, Burke shows off the three aspects of his game that he has vastly improved this season and make him a veritable nightmare to guard.

First is his ability to shield the ball with his body on drives to the basket. Burke is extremely quick and can often get by defenders using his change of speed alone, but he is also great at sealing off his defender and positioning his body while slashing to the basket so that his defender can only get to the ball through fouling.  He uses a combination of speed and positioning to make the lay-in over 7-footer Alex Olah. On the very next play in the sequence, Burke shows why he is the definition of a player who can create his own shot. Burke’s handle and quickness make it relatively easy for him to create space against nearly anyone. Against great one-on-one defenders it becomes more difficult, but against the Wildcats Burke could create an open shot anywhere on the floor with a quick crossover dribble. On this play, Burke simply moves his defender back a few steps with a crossover before burying a shot from deep. The third quality that makes Burke near-impossible to guard is his body control at the rim. Burke has pretty much patented the art of making a shot while falling horizontally to the ground. He draws contact, then is able to maintain enough control over his body as he falls to the floor to make layups over taller players. There are many aspects of Burke’s game that make him one of the toughest assignments in the country, but those three were on full display on Thursday.

There were questions about Hardaway’s ability to play, let alone play well after he was held out of practice for most of the week due to an ankle injury. Even when he was seen dressed and shooting before the game, there was still speculation that he might not play. He did, and the results were spectacular. Hardaway was ruthlessly efficient, hitting 4-of-5 3-point attempts and going 6-of-8 from the floor for 21 points and four assists. Three out of Hardaway’s four makes from long range were from the left wing before he branched off and hit one from the opposite side. After three years of coaching from Beilein, Hardaway has become an expert at identifying what his coach calls “rhythm threes” — 3-pointers taken in the flow of the offense, rather than forced. Beilein is much more focused on the type of shots that Hardaway takes rather than the end result; as long as Hardaway is shooting rhythm threes, he’s happy. To that end, we can see on all four makes that there was no hesitation whatsoever from Hardaway and he was able to spot up cleanly before each one. Hardaway’s first two 3-pointers came against a defense in transition, with Northwestern defenders confused about where they were supposed to be. However, the latter two came in the flow of the half-court offense against the Wildcats’ ill-fated 1-3-1 zone. Northwestern didn’t have a prayer of matching up with Michigan man-to-man given the individual, cross-positional shooting ability on Michigan’s roster but attempting to play zone against the Wolverines is borderline suicidal.

Nik Stauskas didn’t have a very good night shooting the ball (he went just 2-of-7 from 3-point land) but he made his presence felt in other ways. The freshman was aggressive all night, and when his shot wasn’t there, he was committed to making plays for others. In the first half, Stauskas did a great job of using his quickness and length to get to the basket. However, it must be said that Northwestern defenders were having serious issues positioning themselves correctly in the 1-3-1 zone they were running. On Stauskas’s first drive, after getting by the initial layer of defense, there was nothing but empty space in the post until he got to about a foot away from the basket — that shouldn’t happen, no matter what defense you’re running. Still, the mid-air up-and-under was a nice finish at the rim. Stauskas was definitely able to show off his driving ability, but even more than that he displayed his high basketball IQ. He may make the occasional freshman mistake, but Stauskas is a really smart passer. He can break down defenses, using his vision, in a few different ways.  He broke down the defense to find Max Bielfeldt for a drop off pass but also wasn’t shy to make the extra pass for open threes on the perimeter. Finally, the Wolverine freshman shows that Trey Burke isn’t the only one that can run the pick and roll as he finds Morgan for an easy dunk.

Jordan Morgan is oftentimes under-appreciated and over-criticized but the redshirt junior was dominant on both sides of the glass on Thursday. Morgan finished with 12 points and 13 rebounds for his third double-double of the season. His five offensive rebounds were especially impressive as most led directly to points. John Beilein has called Morgan an “expert” at positioning himself for offensive rebounds, and that expertise was on full display against Northwestern. Morgan had no trouble at all establishing himself in the lane and using his big body to block out the 7-foot Alex Olah. As Dylan mentioned in the recap, it was precisely the offensive rebounding by Michigan that made its offense appear so dominant — and, at times, effortless. There is nothing more demoralizing than finally forcing a miss against a hot shooting team before allowing them to clean up their miss for an easy put-back.  That’s exactly what Michigan did against Northwestern. The effect on a defense is similar to the football scenario of forcing a team into a third-and-long situation, only to see the offense convert. The few times Northwestern forced Michigan to miss shots, the Wolverines were able to rebound their own misses nearly half the time — largely thanks to the efforts of Jordan Morgan. Morgan provided Michigan with exactly what the team needs from him: tough baskets in the paint and a strong, reliable rebounding presence.

Perhaps the area where Jordan Morgan’s game has grown the most, according to John Beilein, is in his ability to outlet the ball after a defensive rebound. Morgan has been very good at doing that this season, but Beilein said that it “was not a strength early in his career.” Now, though, “he’s doing a wonderful job outletting to Trey Burke or whoever we get the ball to.” Michigan’s transition offense was lethal against the Wildcats (and has been all season) and a well-placed outlet pass is the primary prerequisite to a transition attack. Morgan has been a big part of that, and on Thursday his outlets keyed a few fast-break opportunities that led to some of Michigan’s more exciting plays.

The first play in this particular sequence shows Morgan finding the player furthest down the court (Tim Hardaway Jr.) and fitting in the outlet pass between two defenders as Hardaway streaks toward mid-court. This leads to Northwestern being unable to get in position in time and a foul, with Hardaway going to the line. If that pass is later, Northwestern probably has a chance to establish position under the basket to draw a possible charge. On the second play, Morgan grabs the rebound and immediately outlets the ball to Trey Burke, who finds Hardaway for the alley-oop. Fast-break points rely on timing as much as plays run out of half-court sets, if not more so, and timely outlet passing is what makes them possible in the first place. It’s fitting that on the last play, Morgan is rewarded for his rebounding and outletting effort, not to mention running the floor, with a pass from Burke near the basket. Morgan slams it home with authority, illustrating just how difficult it is to defend against a team that is diligent rebounding and getting out in transition.