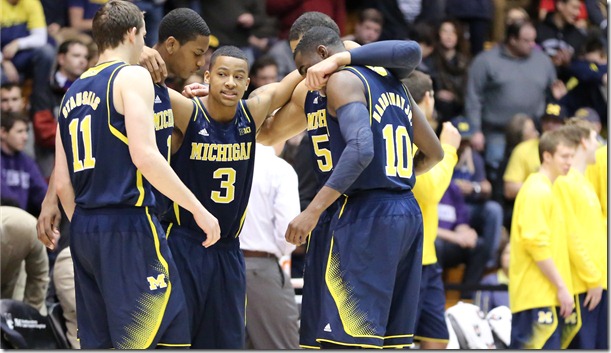 What’s a guy gotta do to get a 10? Burke’s performance over the past two games has been sublime, particularly his first half against Northwestern. Forget being the best point guard in the country; Burke is making a rather convincing case for Player of the Year honors (he’s currently 3rd in the Ken Pomeroy Player of the Year Standings). Burke scored 22 and 23 points against Central Michigan and Northwestern, respectively, and added 11 assists for a double-double against the Chippewas. While Burke didn’t manage double-digit assists against Northwestern, he forced four steals and grabbed four rebounds. But what Burke does best is make the Michigan offense go — there simply isn’t a better scoring point guard in the country, hands-down.

Robinson continues chugging right along and he was just one point from tying his career high of 21 points against Central Michigan. The vast majority of his points continue to come off of cuts to the basket near or around the baseline but don’t sell that production short. Per statistics from Synergy Sports, Robinson is scoring 1.8 points per cutting opportunity and has converted an impressive 26 of 30 opportunities. There are just seven players in the country more effective when cutting to the basket and all seven have used roughly half as many possessions (or fewer) than Robinson. His superb finishing ability is what allows him to go 13-of-17 from the field over a two game span and make it look easy.

While Morgan turned in a lackluster performance against Central Michigan, his showing against Northwestern — 12 points and 13 rebounds — was one of his best of the season. At times it feels like he struggles to finish at the rim but, per Hoop-Math, he’s still converting 70% of his field goal opportunities at the rim, a better mark than Michigan’s other bigs. He is always in position to rebound, he knows where to outlet the ball, and he rarely takes poor shots. Morgan showed off all of these aspects of his game against the Wildcats, and provided Michigan with exactly what the team needs from him: tough, hard-nosed post play and active rebounding.

The freshman was nearly flawless against Central Michigan, hitting five straight 3-pointers en route to a 19-point, seven-rebound performance. And while Stauskas had trouble hitting from deep against Northwestern (2-of-7), the Canadian showed us other aspects of his game. He was able to get in the lane and create for his teammates on multiple occasions and also finish at the rim. One important stat category Stauskas has cleaned up the past two games? Turnovers — he had only one in the past two contests combined.

Hardaway missed a game due to injury but his performance against Northwestern was essentially flawless. The junior scored 21 points on just eight shots and handed out four assists to boot. Initially it seemed as though Hardaway would miss the game, but he ended up gutting out one of his most impressive showings of the year.

LeVert continues to be a great option at guard — he makes few mistakes and can help the team in a bunch of different ways. He just stuffs stat sheets: in only 15 minutes against Northwestern, the freshman logged 6 points (2-of-2 on 3’s), two assists, two rebounds and no turnovers. Playing most of the game against Central Michigan he was less efficient, but scored a career-high nine points. Wolverine assistant coach Bacari Alexander recently tweeted that LeVert arrived on campus at 6-foot-4, 164 pounds and now stands 6-foot-6, 185 pounds.

It seems as though McGary is struggling a bit. He isn’t playing with a ton of confidence under the basket (3-of-9 over the last two games) and needs to work on being stronger with the ball in his hands in the post. He continues to grab rebounds — he had eight against Northwestern — but finishing inside continues to be an issue. McGary has it in him and I think he’s on his way to a breakout game, but the last two games have been tough sledding.

Bielfeldt is a bit limited in what he can do because of his lack of explosiveness, but he is a smart player with excellent timing and really doesn’t take much off the table when he’s in the game. He played strong inside against Northwestern, finishing with four points.

In 10 minutes against Central Michigan, Albrecht notched two points, an assist and a steal. He hardly played against Northwestern and his only statistic was a turnover on an ill-fated backdoor pass.