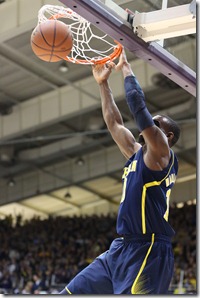 Just when games were supposed to become more challenging, Michigan’s offense demonstrated that it was capable of reaching new heights. Northwestern is an average team trending toward the league’s cellar without its two best players but the offensive clinic that the Wolverines executed in front of a pro-Maize and Blue crowd in Evanston should serve as a warning shot to the rest of the Big Ten.

John Beilein has managed to surround the nation’s best point guard with a versatile combination of scoring threats that are nearly impossible to contain on any given night. Trey Burke set the tone, scoring 13 of the game’s first 20 points to give Michigan 16-4 lead before finishing with 23 points and five assists, but he allowed his supporting cast to shine as well. Tim Hardaway Jr. (21 points), Jordan Morgan (12 points and 13 rebounds), Nik Stauskas (10 points) and Glenn Robinson III (10 points) all reached double-figures as the Wolverines extended their lead to 20 points just 10 minutes into the game. When the smoke cleared, Michigan’s 94-66 win was its most lopsided Big Ten road victory since 1964.

Michigan’s 1.38 points per possession was its best against a Division I opponent this season and it can beat anyone in the country when it shoots the ball that well. The Wolverines made 60 percent of their twos and 59 percent of their threes for a 71% effective field goal percentage that remarkably isn’t even their high water shooting performance of the season. But beyond the hot shooting, Michigan’s ability to exploit Northwestern’s weak defensive rebounding is what gives this offense an aura of sustainability. The Wolverines rarely missed but were still able to corral 40% of their misses when they did. Those second chances – half of which were credited to Jordan Morgan – are an invaluable boost to the Wolverine offensive attack. There will be off-shooting nights before April and Michigan’s offensive rebounding will be the difference in two or three games this season.

It’s tough to know what to make of Michigan’s defense in a game like this. Holding the Wildcats to .97 points per trip isn’t awful but is far from awe-inspiring either. Much of that production came with the game essentially out of hand but this game isn’t going to eliminate any nerves about a potentially suspect Wolverine defense. Michigan did clean up its defensive rebounding woes from its last outing (although Tim Hardaway Jr. grabbed just one rebound), securing over 75% of Northwestern’s misses on the evening. The Wildcats connected on 45% of their twos and 36% of their threes for a 49% effective field goal percentage, all of which falls almost directly in line with their season averages of 46/38/51%.

While John Beilein is certain to praise Iowa and Nebraska over the next week, it’s tough to look at Michigan’s next two home games as anything other than minor distractions before the first true Wolverine test: a Sunday afternoon trip to Columbus, Ohio on January 13th.