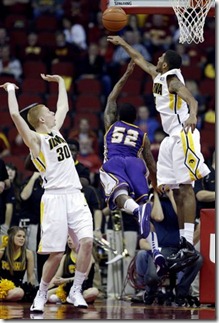 Michigan doesn’t get much time to admire its sterling offensive performance against Northwestern with a short turnaround before its conference home opener against Iowa. After a Thursday evening game outside of Chicago, the Wolverines will host the Hawkeyes in an early noon tip off in Ann Arbor. Iowa is very much a team on the cusp. At this point the Hawkeyes look like a true bubble team; dangerous but inconsistent with the ability to flirt with a .500 conference record and an NCAA tournament berth.

Iowa sits at 11-3, ranked in the top-50 by Ken Pomeroy, but seven of its 11 wins have come against teams ranked 225th or worse. The Hawkeyes can hold their hat on a pair of in-state wins over Iowa State and Northern Iowa and a close home loss to Indiana. After losing early season games to Wichita State and Virginia Tech (a 16 point loss in the Hawkeyes only road game of the season), Iowa did manage to rebound by giving Indiana a scare. In their league opener, the Hawkeyes proved that they can be competitive in the Big Ten, now they must prove they can win games consistently in the league.

Last year’s Iowa squad scored the ball well but struggled to defend. Through 14 games, this team appears to be just the opposite. The Hawkeyes have allowed just three opponents to break the 1-point per possession plateau and held Indiana’s high powered offense to a season low of .92 points per trip. Iowa’s recipe for defensive success isn’t all that different than Michigan’s: force difficult shots and avoid unnecessary fouling. Hawkeye opponents are connecting on just 42% of their twos and 28% of their threes for an 42% effective field goal percentage allowed which ranks among the top ten nationally. Iowa’s free throw rate (FTA/FGA) allowed also ranks in the top 50 nationally at 27% but the Hawkeyes are just average forcing turnovers and cleaning up the defensive glass.

Michigan has spent much of the last two months dismantling below average defenses and Iowa should be the best defense that the Wolverines have faced since playing against Pittsburgh and Kansas State over Thanksgiving. The Hawkeyes have the length and athleticism to perhaps bother Michigan but its worth noting that their worst defensive performances have all come away from Iowa City at road or neutral sites.

Offensively, nothing has come easy for the Hawkeyes mainly because their roster lacks jumpshooters. Iowa finishes effectively at the rim, but struggles to shoot the ball further away from the hoop. A quarter of the Hawkeyes’ field goal attempts come at the rim and they finish at an impressive 71% rate at the cup but shoot just 37% on two point jumpers and 31% of threes.

All teams finish more effectively at the rim, that’s no grand discovery but Iowa’s struggles are magnified. Michigan, for example, connects on a more respectable 42% of its two point jumpers and 42% of its three point shots (and 70% at the rim). Given Iowa’s ability around the basket, it should come as no surprise that the Hawkeyes are also productive on the offensive glass and at the charity stripe. Iowa ranks in the top-40 nationally in offensive rebounding rate (rebounding 38% of its misses) and free throw rate (45% FTA/FGA) on the season. While Iowa’s offensive rebounding appears strong on the surface, the Hawkeyes failed to rebound more than 30 percent of their misses against four of the five toughest games (three losses) and struggled to score as a result.

Michigan’s defensive game plan will be a three-step approach, two thirds of which plays directly into its strengths.

Michigan has proven that it’s as good as anyone in the country at preventing free throws and controlling the defensive glass. What the Wolverines haven’t proven is that they have the ability to negate a good offense that can get to the basket. North Carolina State shot 63 percent on twos, Bradley knocked down 59% of its twos, and even Central Michigan matched that 59% clip. Iowa isn’t a great offense but stopping the Hawkeyes around the basket would be something that the Wolverines could hang their hats on going forward.

Roy Devyn Marble is the primary option in the Iowa offense, averaging 16 points, five rebounds and three assists per game. The 6-foot-6 junior has improved steadily over his career and is the most productive Hawkeye, thriving attacking the basket and getting to the free throw line. While Marble uses the most possessions, Aaron White is the most efficient and dynamic player in the Iowa attack. The 6-foot-8, 218 pound swingman does a little bit of everything but he’s most effective around the basket, whether on the offensive glass, getting to the free throw line or finishing at the hoop.

Three freshmen start for the Hawkeyes and all have had productive starts to their careers. Point guard Mike Gesell struggles with turnovers at times but can run the team and isn’t afraid to score when called upon.  Big man Adam Woodbury measures in at 7-foot-1 and 235 pounds and provides the sort of shotblocking and rebounding presence that you would expect. He’s not a high usage player offensively but can finish around the rim (58%) and get to the free throw line (41% FTA/FGA) but he struggles to convert his freebies (51% FT).

While Gesell and Woodbury were consensus top-100 recruits, Anthony Clemmons is the freshman surprise. The the 6-foot-1 guard moved into the starting lineup in December and has averaged six assists per contest since assuming a starting spot. Clemmons is slightly turnover prone and has inconsistent shooting results – 43% on twos, 41% on threes and 50% on free throws – but is a dangerous player that demands attention.

Off the bench, Fran McCaffery has the luxury of using three former starters in Zach McCabe, Eric May and Melsahn Basabe. The downside for McCaffery is that all three players don’t only come off of the bench because of the injection of youth to the Iowa roster, they’ve also regressed somewhat over the course of their careers.

While Michigan’s recent trips to Carver Hawkeye have been heartburn inducing rollercoasters, games against the Hawkeyes everywhere else have been pain free. Since 2009, the Wolverines have played three overtime periods in four games and are 2-2 against Iowa in Iowa City. At home or in the Big Ten Tournament, Michigan is 5-0 over the same span and has outscored the Hawkeyes by an average of 16 points per game.

Although Ken Pomeroy’s ratings say that Iowa is the third best team that Michigan has faced this season, the gulf in talent between Iowa and Michigan is still significant. This is a game that the Wolverines should win fairly comfortably in the confines of their home arena, especially given Iowa’s lone road game was a 16 point victory to a Virginia Tech squad that lost to Georgia Southern at home. Pomeroy’s computers agree, projecting a 76-63 Michigan win and giving the Wolverines a 78% chance of remaining perfect on the season.

This & that: 2014 Michigan target Vince Edwards was expected as a visitor but those plans appear to have fallen through. Fran McCaffery remembers thinking Burke was elite as a high school guard. Jon Horford is still on the mend but promises he’ll play again this season. This will be Michigan’s 7th sell out in 10 home games. SI.com projects Trey Burke as the No. 13 pick in the NBA draft and quotes a scout who haves about Burke’s game. If Michigan is able to defend home court against Iowa and Nebraska it would match its best start in program history (16-0) entering a road trip to Columbus.